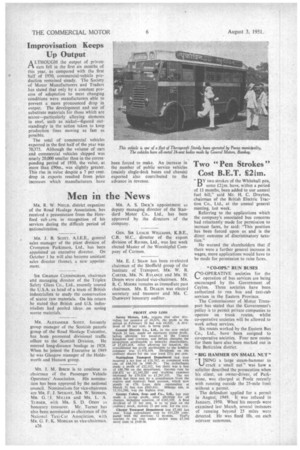 Page 28, 3rd August 1951 — Two "Pen Strokes" Cost B.E.T. £2m.
Close
Noticed an error?
If you've noticed an error in this article please click here to report it so we can fix it.
Keywords : Cooperatives, The Co-operative Food

BY two strokes of the Whitehall pen, sonic £2m. have, within a period of 13 months, been added to our annual fuel bill," said Mr. H. C. Drayton, chairman of the British Electric Traction Co., Ltd., at the annual general meeting, last week.

Referring to the applications which the company's associated bus concerns had reluctantly made for permission to increase fares, he said: "This position has been forced upon us and is the direct outcome of discriminatory taxation."

He warned the shareholders that if there were a further general increase in wages, more applications would have to be made for permission to raise fares.

CO-OPERATIVE societies for the operation of bus services are being encouraged by the Government of Ceylon. Three societies have been authorized to run bus and taxi-cab services in the Eastern Province.

• The Commissioner of Motor Transport has stated that the Government's ,policy is to permit private companies to operate on trunk routes, whilst co-operative societies will be allowed to work urban services.

Six routes worked by the Eastern Bus Co., Ltd., have been assigned to co-operative societies. Four new routes for them have also been marked out in the Batticaloa district.

"BIG HAMMER ON SMALL NUT" "ISING a large steam-hammer to

%.0 crack a small nut" was how a solicitor described the prosecution when his client, an owner-driver, of Parkstone, was charged at Poole recently with running outside the 25-milelimit without a permit.

The defendant applied for a permit in August, 1949. It was refused in January, 1950. When his records were examined last March, several instances of running beyond 25 miles were detected. I4e was fined 10s. on each relevant summons,