OIL AND THE EMPIRE. 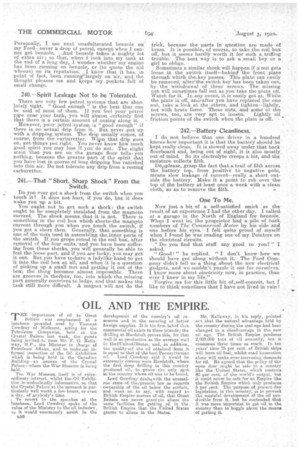 THE importance of oil to Great Britain was emphasized at a luncheon presided over by Viscount Coweiray of Midhurst, acting for the Petroleum Companies, held at the Crystal Palace; last week, the guests -being invited,to meet Mr, F. G. Kell-way, M.P., the Minister in Charge of Petroleum Affairs, and to make .an informal inspection of the Oil Exhibition which is being held in the Canadian Building—an annexe of the Crystal

Palace where the Wax Museum is being held.

The Wax Museum itself is of extraordinary interest, whilst the-Oil Exhibition is/undoubtedly informative, so that the Crystal Palaee at the moment is particularly well worth a few hours, or even a day, of anybody's time.

. To revert to the speeches at the luncheon, Lord Oowdray spoke of the value of the Ministry to the oil industry, as it would enormously assist in the B50 • development of the country's oil resources and in the securing of better foreign supplies. It is his firm belief that commercial oil exists in these islands; the drilling at Hardstoft proves this, for that well is as productive as the average' well in thettinitedjStates, and, in addition, the quality 'oaf the oil obtained from it is equal to that of the best Pennsylvanian oil. • Lord tOcevdray said it would be extremely curious were Hardstoft, where the first deep drilling in this country produced oil, to prove the only spot in the country where oil was to be found.

Lord Cowdray dealttwith the anomalous stake of the ipresent law as regards ownership of the oil below the surface, and went on to say, with regard to British Empire sources of oil, that Great Britain can .never grant th aliens the same facilities for getting oil in the British Empire that the United States grants to aliens in the States.

Mr, Kellaway, in his reply, pointed ort that the natural advantage held by the country during the coal age had been changed to a disadvantage in the new oil age. The British Empire produces 2,000,000 tons of oil annually, but it consumes three times as Much. In ten years' time 75 per cent, of British ships will burn oil fuel,;whilst road lecomotior. alone Will make ever-increasing demands for oil. He agreed that the policy of the open door might be safe to a country like the United -States, which controls 80 per cent, of the world's output, but it could -never be safe for an Empire like the British Empire which only produces 5 per cent. The purpose of present-day legislation, in this country, is to prevent the wasteful development of the oil producible from it, but he contended that it -was more important to get oil in the country than to boggle about the means of getting it.