No to Welsh low-loader 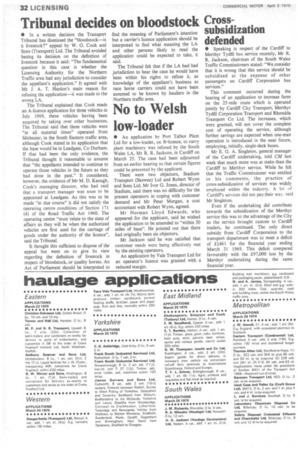 • An application by Port Talbot Plant Ltd for a low-loader, on B-licence, to carry plant machinery was refused by the South Wales LA, Mr R. R. Jackson, in Cardiff on March 25. The case had been adjourned from an earlier hearing so that certain figures could be presented by the applicant.

There were two objectors, Stadium Transport (Skewen) Ltd and Robert Wynn and Sons Ltd. Mr Ivor G. Jones, director of Stadium, said there was no difficulty for the present operators in coping with customer demand and Mr Peter Morgan, a cost accountant with Robert Wynn, agreed.

Mr Norman Lloyd Edwards, who appeared for the applicant, said he wished the application to be amended to "within 30 miles of base". He pointed out that there had originally been six objectors.

Mr Jackson said he was satisfied that customer needs were being effectively met by the existing operators.

An application by Vale Transport Ltd for an operator's licence was granted with a reduced margin.