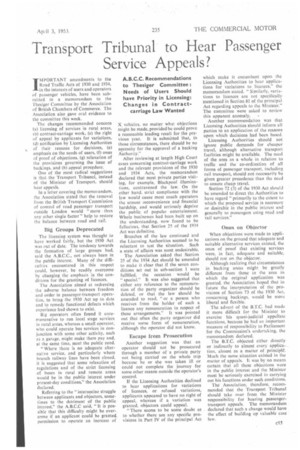 Page 53, 3rd April 1953 — T ransport Tribunal to Hear Passenger
Close
Noticed an error?
If you've noticed an error in this article please click here to report it so we can fix it.
Keywords :

A.B.C.C. Recommendations to Thesiger Committee : Needs of Users Should have Priority in Licensing: Changes in Contract carriage Law Wanted

IMPORTANT amendments to the Road Traffic Acts of 1930 and 1934, in the interests of users and operators of passenger vehicles, have been sub mitted in a memorandum to the Thesiger Committee by the Association of British Chambers of Commerce. The Association also gave oral evidence to the committee this week.

The changes recommended concern (a) licensing of services in rural areas, tb) contract-carriage work, (c) the right of appeal by applicants for variations, (d) notification by Licensing Authorities of their reasons for decisions, (e) a. emphasis on the needs of users, (f) onus of proof of objections. (g) relaxation of the provisions governing the issue of backings. and (h) appeal procedure.

One of the most radical suggestions is that the Transport Tribunal, instead of the Minister of Transport, should hear appeals.

In a letter covering the memorandum, the Association stated that the removal from the British Transport Commission of control of road passenger transport outside London would "more than any other single factor" he!), to restore the balance between road and rail.

The licensing system was thought to have worked fairly, but the 1930 Act was out of date, The tendency towards the formation of large groups had, said the A.B.C.C., not always been in the public interest. Many of the difficulties encountered in this respect could, however, be readily overcome by changing the emphasis in the conditions for the granting of licences.

The Associ,ation aimed at redressing the adverse balance between freedom and order in passenger-transport operation, to bring the 1930 Act up to date and to remedy functional defects which experience had shown to exist.

Big operators often found it Loiremuncrative to run local stage services in rural areas, whereas a small operator, who could operate bus services in conjunction with some other activity, such as a garage, might make them pay and. at the same time, meet the public need.

"Where there is no adequate alternative service, and particularly where branch railway lines have been closed, it is suggested that some relaxation of regulations and of the strict licensing of buses in rural and remote areas would be in the public interest under present-day conditions," the Association declared.

Referring to the "internecine struggle between applicants and objectors, sometimes to the detriment of the public interest." the A.B.C.0 said, " It is possible that this difficulty might be overcome if an applicant could be granted permission to operate an increase of

X vehicles, no matter what objections might be made, provided he could prove a reasonable loading result for the previous year. It is submitted that, in those circumstances, there should be no necessity for the approval of a backing Authority."

After reviewing at length High Court eases concerning contract-carriage work and the relevant provisions of the 1930 and 1934 Acts, the memorandum declared that most private parties visiting, for example, Blackpool illuminations, contravened the law. On the other hand, strict compliance with the law would cause most coach operators the utmost inconvenience and financial hardship, and would seriously deprive the public of popular entertainment. Whole businesses had been built up on the understanding, now found to he fallacious, that Section 25 of the 1934 Act was definitive.

Breaches of the law continued and the licensing Authorities seemed to be reluctant to test the situation. Such a state of affairs was most undesirable.

The Association asked that Section 25 of the 1934 Act should be amended to make it clear that if the seven conditions set out in sub-section I were fulfilled, the occasion would be "special." It was also suggested that either any reference to the remuneration of the party organizer should be deleted, or that the law should be amended to read, "or a person who receives from the holder of such a licence any remuneration in respect of these arrangements." It was pointed out that often the party organizer did receive some form of remuneration, although the operator did not know.

Another suggestion was that an operator should not be prosecuted through a member of a private party not being carried on the whole trip because he or she was taken ill or could not complete the journey for some other reason outside the operator's control.

If the Licensing Authorities declined to hear applications for variations of licences, or refused variations, applicants appeared to have no right of appeal, whereas if a variation was granted, objectors could appeal.

which make it encumbent upon the Licensing Authorities to hear applications for variations to licences." the memorandum stated. "Similarly, variations to licences are not specifically mentioned in Section 81 of the principal Act regarding appeals to the Minister." The committee were asked to review this apparent anomaly. • Another recommendation was that Licensing Authorities should inform all parties to an application of the reasons upon which decisions had been based.

Licensing Authorities should not ignore public demands for cheaper travel, although alternative transport facilities might be available. The need of the area as a whole in relation to traffic and the co-ordination of all forms of passenger transport, including rail transport, should not necessarily he given greater precedence than the need to ensure cheap travel.

Section 72 (3) of the 1930 Act should he amended to direct the Authorities to have regard "primarily to the extent to which the proposed service is necessary or desirable in the 'public interest and generally to passengers using road and rail services."

Although realizing that circumstances in backing areas might be greatly different from those in the area in which the original application was granted, the Association hoped that in future the interpretation of the provisions of Section 73 of the 1930 Act, concerning backings, would be more liberal and flexible.

The advent of the B.T.C. had made it more difficult for the Minister to exercise his quasi-judicial appellate functions, because he had an important measure of responsibility to Parliament for the Commission's undertaking, the memorandum declared.

The B.T.C. objected either directly or indirectly to almost every application, almost as a matter of principle. Much the same situation existed in the matter of appeals. Ti was by no means certain that all these objections were in the public interest and the Minister must be seriously exercised in carrying out his functions under such conditions.

The' Association, therefore, recommended that the Transport Tribunal should take over from the Minister responsibility for hearing passengertransport appeals. The memorandum declared that such a change would have the effect of building up valuable case law.