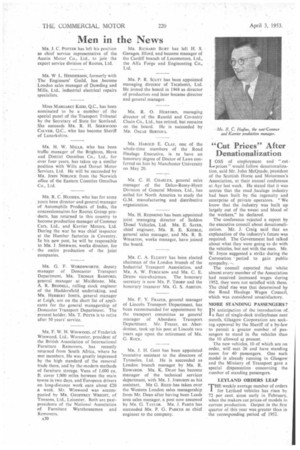 Page 32, 3rd April 1953 — Men in the News
Close
Noticed an error?
If you've noticed an error in this article please click here to report it so we can fix it.
Keywords : Business / Finance

MISS MARGARET KIDD. Q.C., has been nominated to be a member of the special panel of the Transport Tribunal by the Secretary of State for Scotland. She succeeds MR. R. H. SHERWOOD CALVER, Q.C., who has become Sheriff of Lanarkshire.

MR. H. W. MILLS, who has been traffic manager of the Brighton, Hove and District Omnibus Co., Ltd., for over four years, has taken up a similar position with Wilts and Dorset Motor Services, Ltd. He will be succeeded by MR. JOHN NIBLOCK from the Norwich office of the Eastern Counties Omnibus Co.. Ltd.

MR. R. C. HUGHES, who has for some years been director and general manager of Automobile Products of India, the concessionnaires for Rootes Group products, has returned to this country to become production manager of Commer Cars, Ltd.. and Karrier Motors. Ltd. During the war he was chief inspector at the Humber factories in Coventry. In his new post, he will be responsible to MR.. J. SHERWIN, works director, for the entire production of the joint companies.

MR. F. W. H. WIN WOOD, of Frederick Winwood, Ltd.. Worcester, president of the British Association of International Furniture Removers, has recently returned from South Africa. where he met members. He was greatly impressed by the high standard of the removal trade there, and by the modern methods of furniture storage. Vans of 1,600 cu. ft. cover 1,000 miles between the main towns in two days. and European drivers on long-distance work earn about £20 a week. Mr. Winwood was accompanied by MR. GEOFFREY WRIGHT. of Timsons. Ltd., Leicester. Both are pastpresidents of the National Association of Furniture Warehousemen and Removers.

MR. P. R. Scurr has been appointed managing director of Tecalemit, Ltd. He joined the board in 1948 as director of production and later became director and general manager.

MR. R. 0. HERFORD, managing director of the RenoId and Coventry Chain Co., Ltd., has retired, but remains on the board. He is succeeded by

MR. HAROLD E. CLAY, one of the whole-time members of the Road Haulage Executive, is to have an honorary degree of Doctor of Laws conferred on him by Manchester University on May 20.

MR. C. A. Eworr has been elected chairman of the London branch of the Industrial Transport Association, and MR. A. W. FERGUSON and MR. C. E. DIXON vice-chairmen. The honorary secretary is now MR. P. THORP and the honorary treasurer MR. G. S. AstrroN.

MR. J. H. Gent has been appointed 'executive assistant to the directors of Tyres°les, Ltd. He is succeeded as London branch manager by MR. R. EDWARDS. MR. K. DEAN has become manager of the technical services department, with MR. J. JOHNSON as his assistant. MR G. REED has taken over the Western London sales managership from Mr. Dean after having been Leeds area sales manager, a post now assumed by MR. G. TAYLOR. MR. J. PARES has succeeded MR. P. G. PARKES as chief engineer to the company.