A surprise for the General 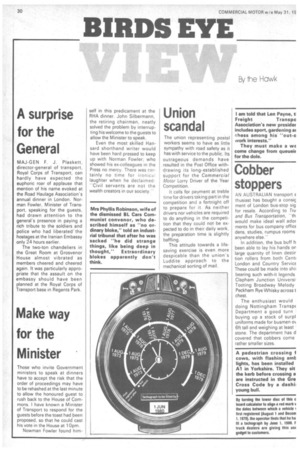 Page 32, 31st May 1980 — A surprise for the General
Close
Noticed an error?
If you've noticed an error in this article please click here to report it so we can fix it.
Keywords : Royal Corps Of Transport

MAJ-GEN F. J. Plaskett, director-general of transport, Royal Corps of Transport, can hardly have expected the euphoric roar of applause that mention of his name evoked at the Road Haulage Association's annual dinner in London. Norman Fowler, Minister of Transport, speaking for the guests, had drawn attention to the general's presence in paying a rich tribute to the soldiers and police who had liberated' the hostages at the Iranian Embassy only 24 hours earlier.

The two-ton chandeliers in the Great Room at Grosvenor House almost vibrated as members cheered and cheered again. It was particularly appropriate that the assault on the embassy should have been planned at the Royal Corps of Transport base in Regents Park.