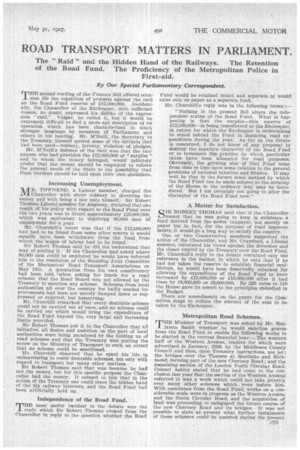 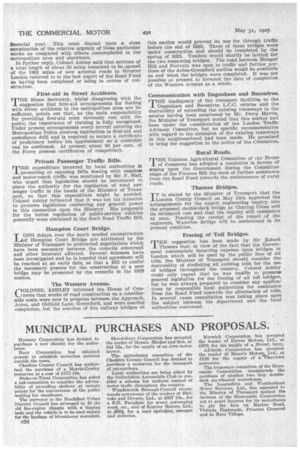 Page 47, 31st May 1927 — ROAD TRANSPORT MATTERS IN PARLIAMENT.
Close
Noticed an error?
If you've noticed an error in this article please click here to report it so we can fix it.
Keywords : Transport Economics, Road Fund, Winston Churchill

The " Raid " and the Hidden Hand of the Railways. The Retention of the Road Fund. The Proficiency of the Metropolitan Police in First-aid.

THE second reading of -the Finance Bill offered occasion Mr the repetition of protepsts against the raid on the Road Fund reserve of £12,000,000. :Incidentally, the Chancellor of the Exchequer, with sufficient reason, no doubt, expressed his dislike of the expres.sion "raid." Vulgar, he called it, but it would be extremely difficult to find a more apt description of an operation which has been characterized in much stronger language by members of Parliament and others in his hearing. Mr. M'Neill, the Secretary to the Treasury, himself quoted some of the epithets that had been used--robbery, larceny, violation of pledges.

Mr. defence of the raid was that the taxpayers who had provided the £12,000,000 of " surplus " and to whom the money belonged, would infinitely prefer that the money should be employed to relieve the general need's of the State to the possibility that fresh burdens should be laid upon their own shoulders.

MTR. TOWNENTD, a Labour member, charged the 111-Chancellor with sheer robbery in diverting the money and with being a law unto himself. Sir Robert

Thomas, Liberal member for Anglesey, declared that one result of his policy with regard to the Road Fund over the two years was to divert approximately 125,000,000, which was equivalent to depriving 80,000 men of employment for a year.

Mr. Churchill's retort was that if the £12,000,000 had had to be found from some other source it would equally have been withdrawn from the fund from which the wages of labour had to be found.

Sir Robert Thomas said he did not understand that way of putting it. If the Chancellor had asked where 80,000 men could be employed he would have referred him to the resolution of the Standing Joint Committee of the Mechanical Road Transport Associations on May 18th. A deputation from his own constituency had been told, 'when asking for funds for a road scheme, that the Road Board was not allowed by the Treasury to sanction any scheme. Schemes from local authorities all over the country for badly needed improvements had been not merely damped down or suppressed or rejected, but hamstrung.

Mr. Churchill remarked that every desirable scheme could not be carried out at once, and no scheme could be tarried out which would bring the expenditure of the Road Fund beyond the very large and increasing limits provided.

Sir Robert Thomas put it to the Chancellor that all initiative, all desire and ambition on the part of local authorities were being paralysed by the holding up of road schemes and that the Treasury was putting the screw on the Ministry of Transport to such an extent that no scheme could be sanctioned.

Mr. Churchill observed that he spent his life in endeavouring to resist desirable schemes, not only with regard to transport but many other matters.

Sir Robert Thomas said that was because he had not the money, but for this specific purpose the Chancellor had the money. It seemed to him that in the action of the Treasury one could trace the hidden hand of the big railway interests, and the Road Fund had been artificially held up.

Independence of the Road Fund.

Fund would be retained intact and separate or would exist only on paper as a separate fund.

Mr. Churchill's reply was in the following terms :— "Nothing in the present Bill alters the independent status of the Road Fund. What is happening is that the surplus—this reserve of £12,000,000—is being transferred to the Exchequer, in return for which the Exchequer is undertaking to stand behind the Fund in financing road expenditure during the year. As far as the future is ' concerned, I do not know of any proposal to destroy the separate character of the Road Fund or to terminate the practice by which particular taxes have been allocated for road purposes. Obviously, the grOwing size of that Fund must from time to time have some relation to the general problems of national taxation and finance. It may well be that in the future some method by which the Road Fund can be made subject to the scrutiny of the House in the ordinary way may be introduced. But I am certainly not going to alter the character of the Road Fund now."

A Matter for Satisfaction.

SIR ROBERT THOMAS said that if the Chancellor 1.3,ineant thathe was going to keep in existence a fund derived from the motor taxpayer, not merely on pa-per but in fact, for the purpose of road improvements, it would go a long way to satisfy the country.

One or two Conservative membens supported the action of the Chancellor, and Mr. Crawfurd, a Liberal Member, reiterated his views against the diversion and the closer control by the Treasury`over the Road Fund. Mr. Churchill's reply to the debate contained only one reference to the matter, in which he said that if he had not taken the reserve to establish financial equilibrinin, he would have been deservedly attacked for allowing the expenditure of the Road Fund to have increased by £15,000,000 or 116,000,000 after it had risen by 18,000,000 or £9,000,000. By 235 votes to 110 the House gave its assent to the principles embodied in the Budget.

There are amend-meats on the paper for the Committee stage to reduce the amount of the sum to be taken by the Exchequer.

Metropolitan Road Schemes.IlE Minister of Transport was asked by Mr. Ben i_ jamin Smith whether he would sanction grants from the Road Fund to enable the following works to be started in the current financial year :—The western half of the Western Avenue, tenders for which were advertised in January, 1926, by the Middlesex County Council and then, Upon Treasury instructions, not let; the bridges over the Thames at Mortlake and Richmond, forming part of the new Chertsey Road; and the remaining section of the London North Circular Road. Colonel Ashley stated that he had come to the conclusion last year that the section of the Western Avenue referred to was a work which could not take priority over many other schemes which were before him. With assistance from the Road Fund, works on a considerable scale were in progress on the Western Avenueand the North Circular Road, and the acquisition of land was proceeding to safeguard the future course of the new Chertsey Road and its bridges. It was not possible to state at present what further instalments of these schemes could be assisted during the present

financial year. This must depend upon a close examination of the relative urgency of these particular works as compared with others contemplated in the metropolitan area and elsewhere.

In further reply, Colonel Ashley said that sections of a total length of about 50 miles remained to be opened of the 189i miles of new arterial roads in Greater London referred to in the last report of the Road Fund as having been completed or being in course of construction.

THE Home Secretary, whilst disagreeing with the suggestion that first-aid arrangements for dealing with street accidents in the metropolitan area are insufficient, points out that, as the main responsibility for providing first-aid must obviously rest with the police, the importance of training is fully recognized. Under present arrangements every recruit entering the Metropolitan Police receives instruction in first-aid and ambulance drill and is required to secure a certificate of proficiency before his appointment as a constable can be confirmed. At present about 90 per cent, of the Force possess certificates of competency.

THE expenditure incurred by local authorities in promoting or opposing Bills dealing with omnibus and motor-coach traffic was mentioned by Mr. F. Hall, who urged that legislation should be introduced to place the authority for the regulation of road passenger traffic in the hands of the Ministry of Transport, so that this expenditure might be avoided. Colonel Ashley intimated that it was not his intention to promote legislation conferring any general power in this connection upon the Ministry. His proposals for the better regulation of public-service vehicles generally were contained in the draft Road Traffic Bill.

TONG delays over the much needed reconstruction 4 of Hampton Court Bridge are attributed by the Minister of Transport to protracted negotiations which have been necessary between the councils concerned and other interests affected. Severalschemes have been investigated and he is hopeful that agreement will be reached at an early date, so that a Bill to confer the necessary powers for the construction of a new bridge may be promoted by the councils in the 1928 session.

COLONEL 'ASHLEY informed the House of Commons that works of road construction on a considerable scale were now in progress between the Approach, Acton, and Oldfield Lane, Greenford, and were nearing completion, but the erection of five railway bridges on

this section would prevent its use for through traffic before the end of 1928. Three of these bridges were under construction and should be completed by the spring of 1928. Tenders would shortly be invited for the two remaining bridges. The road between Hangar Hill and Perivale was open to traffic and further portions of the Acton-Greenford section would be available as and when the bridges were completed. It was not possible at present to forecast the date of completion of the Western Avenue as a whole.

Communication with Dagenham and Becontree.

THE inadequacy of the transport facilities to the Dagenham and Becontree L.C.C. estates and the desirability of extending the existing tramways to the estates having been mentioned by Mr. Percy Harris, the Minister of Transport stated that this matter had been under the consideration of the London Traffic Advisorly Committee, but no specific recommendation with retard to the extension of -the existing tramways in this neighbourhood had been made. He promised to brin the suggestion to the notice of the Committee.

THEI Unionist Agricultural Committee of the House of tljommons has adopted a resolution in favour of urging upon the Government during the Committee stage o the Finance Bill the need of further assistance from tlT4e Road Fund towards the maintenance of rural roads.

. Pending the receipt of the report of the at one

rs, Waterloo Bridge will be maintained in its enginet Freeing of Toll Bridges.

suggestion has been made by Sir Robert as that, in view of the fact that the Governontemplate incurring expense upon bridges in mH Th ment Londor which will be used by the public free of all tolls, file Minister of Transport should consider the desirability of abolishing all existing tolls for the use of bri could genera

ges throughout the country. Colonel Ashley only repeat that he was unable to promote legislation for the freeing of all toll bridges,

but he, was always prepared to consider any applications by responsible local authorities for assistance from the Road Fund towards the elimination of tolls. In several cases consultation was taking place upon the subject between his department and the local authorities concerned. presen condition.