The Farm Tractor in Hampshire. 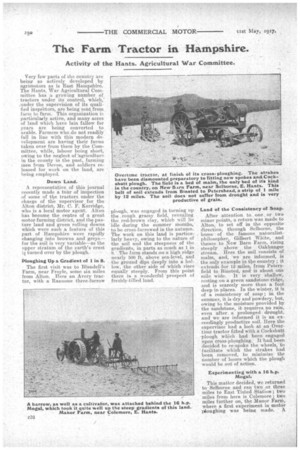 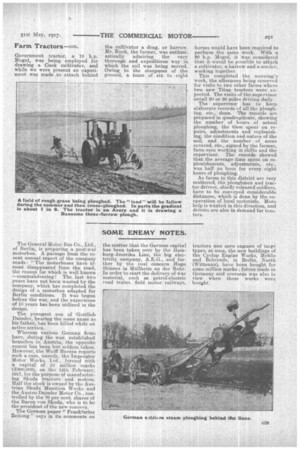 Page 8, 31st May 1917 — The Farm Tractor in Hampshire.
Close
Noticed an error?
If you've noticed an error in this article please click here to report it so we can fix it.
Keywords : Agricultural Machinery, Tractor, Plough, Cultivator, East Tisted, Harrow, Colemore

Very few parts of the country are being . so actively developed by agrimotors as is East Hampshire. The Hants. War Agricultural Committee has a growing number of tractors under its control, which,' .under the supervision of its qualified inspe-Ctors, are being sent from farm to farm. This organization is particularly active, and many acres of land which have lain fallow, for years are being converted to arable. Farmers who.do not readily fall in line with this modern development are having their farms taken over from them by the Committee' while, labour being short, owing to the neglect of 'agriculture in the county in the past, farming men from Devon, and soldiers released for work on the land, are ' being employed.

A representative of this journal recently made a tnnr of inspection of some of the tractors under the charge of the Supervisor for the Alton district, Mr. C. R Kerridge, who is a local motor agent. Alton has become the centre of a great motor-farming district, and the pasture land and green rolling downs which were such a feature of this part of Hampshire were rapidly changing into browns and greys— for the sail is very Variable—as the upper stratum of the earth's crust turned over by the plough.

Ploughing Up a Gradient of 1 in 8.

The first visit was to Blundell's Farm' near Froyle, some six miles from Alton. Here an Avery tractor, with a Ransorne three-furrow plough, was engaged in turning up the . rough grassy field, revealing the red-brown clay, which will lie idle during the sumniermonths, to be cross-furrowed in the autumn. The work on this land is partieularly heavy, owing to the nature of the soil and the steepness of the gradients, in parts as much as 1 in 8. The farm stands on a high ridge nearly 500 ft. above sea-level, and the ground dips deeply into a hollow, the other side of which rises equally steeply. From this point there is a wonderful 'prospect of freshly-tilled land. .

Land of the Consistency of Soap.

After attention to one , or two minor points, a return was made to Alton, to set off in the opposite direction, through Selborne, the home of the famous naturalistphilosopher, Gilbert White, and thence to New Barn Farm, rising steeply above the Oakhanger stream. Here the soil consists of maim, and, we are informed, is the only example in ftte country; it extends for 12 miles, from Petersfield to Binsted, and is about one mile wide. It is very shallow, resting on a green sandstone ridge, and is scarcely more than a foot deep in places. In the winter, it is of a consistency of soap ; in the summer, it is dry and powdery, but, owing to the moisture provided by the sandstone, it requires no rain, even after a prolonged draught, and we are informed it is an exceedingly productive soil. Here the supervisor had a look at an Overtime tractor fitted with a Cockshutt -plough which had been engaged upon cross ploughing. It had been decided to re-spoke the wheels, fo facilitate which the strakes had been rembved, to minimize the number of hours which the plough would be out of action.

This matter decided, we returned to Selborne and ran two or three miles to East Tisted station ; two miles from here is Colemore ; two miles further on, the Manor Farm, where a first experiment in motor ploughing was being made. A

Government tractor, a 19 h.p. Mogul, was being employed for drawing a Cook cultivator, and while we were present an experiment was made to attach behind the cultivator a drag, or harrow. Mr. Rook, the farmer, was enthusiastically admiring the very thorough and expeditious way in which the soil was being moved. Owing to the steepness of the ground, a team of six to eight horses would have been required to perform the same work. With a 20 b.p. Mogul, it was considered that it would be possible to attach a cultivator, a harrow and a seeder, working together.

This completed the morning's work, the afternoon being reserved for visits to two other farms where two new Titan tractors were expected. The visits of the supervisor entail 20 or 30 miles driving daily.

The supervisor has to keep elaborate records of all the ploughing, etc. done. The records are prepared quadruplicate, showing the number of hours of actual ploughing, the time spent. on repairs, adjustments and replenishing, the condition and nature of the soil, and the number of acres covered, etc., signed by the farmer, farm-men working in shifts and the supervisor. The records showed that the average time spent on replenishments, adjustments, etc., was half an hour for every eight hours of ploughing. As farms in this district are very scattered, the ploughmen and tractor.drivers, chiefly released soldiers, have to be conveyed considerable distances, whieh is done by the cooperation of local motorists. More help is wanted in this direction' and drivers are also in demand for tractors.