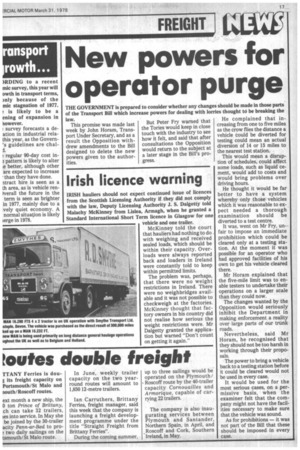 Page 19, 31st March 1978 — New powers for operator purge
Close
Noticed an error?
If you've noticed an error in this article please click here to report it so we can fix it.
Keywords : John Horam, Horam, Truck

THE GOVERNMENT is prepared to consider whether any changes should be made in those parts of the Transport Bill which increase powers for dealing with lorries thought tci be breaking the law.

This promise was made last week by John Horam, Transport Under Secretary, and as a result the Opposition withdrew amendments to the Bill designed to delete the new powers given to the authorities. But Peter Fry warned that the Tories would keep in close touch with the industry to see how it felt, and said that after consultations the Opposition would return to the subject at a later stage in the Bill's progress. He complained that increasing from one to five miles as the crow flies the distance a vehicle could be diverted for testing could mean an actual diversion of 14 or 15 miles to the nearest test station.

This would mean a disruption of schedules, could affect some loads, such as liquid cement, would add to costs and would bring problems over driving hours.

He thought it would be far better to have a system whereby only those vehicles which it was reasonable to expect needed a thorough examination should be diverted to a test centre.

It was, went on Mr Fry, unfair to impose an immediate prohibition which could be cleared only at a testing station. At the moment it was possible for an operator who had approved facilities of his own to get his vehicle cleared there.

Mr Horam explained that the five-mile limit was to enable testers to undertake their operations on a larger scale than they could now.

The changes wanted by the Opposition would seriously inhibit the Department in making enforcement a reality over large parts of our trunk roads.

Nevertheless, said Mr Horam, he recognised that they should not be too harsh in working through their proposals.

The power to bring a vehicle back to a testing station before it could be cleared would not be used in every case.

It would be used for the most serious cases, on a permissive basis, when the examiner felt that the company might not have the facilities necessary to make sure that the vehicle was sound.

As for prohibitions — it was not part of the Bill that these should be imposed in every case.