HOW KENSINGTON DEALS WITH ITS REFUSE. 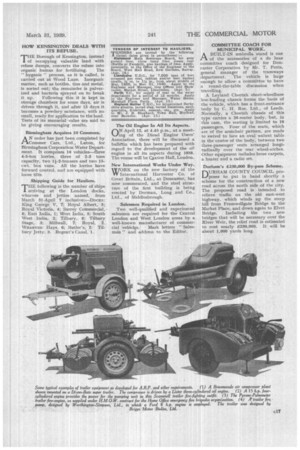 Page 71, 31st March 1939 — HOW KENSINGTON DEALS WITH ITS REFUSE.
Close
Noticed an error?
If you've noticed an error in this article please click here to report it so we can fix it.

THE Borough of Kensington, instead of occupying valuable land with refuse dumps, converts the refuse into

organic humus for fertilizing. The " hyganic " process, as it is called, is carried out at Wood Lane. Inorganic matter, such as bottles, tins and metal, is sorted out; the remainder is pulverized and bacteria sprayed on to break it up. Following this it is kept in storage chambers for some days, air is driven through it, and after 15 days it becomes a powdery substance, with no smell, ready for application to the land. Tests of its manurial value are said to be giving encouraging results.