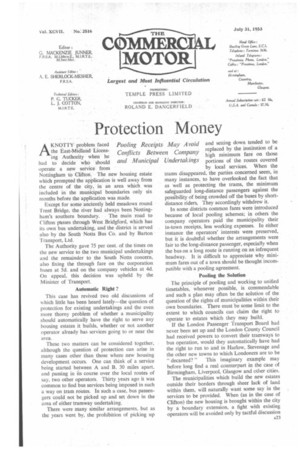 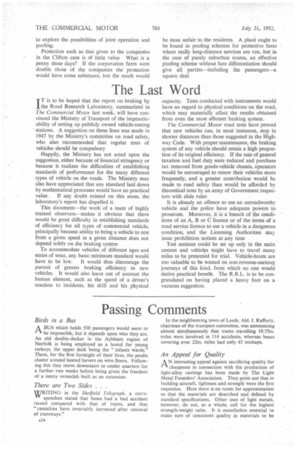 Page 25, 31st July 1953 — Protection Money
Close
Noticed an error?
If you've noticed an error in this article please click here to report it so we can fix it.

AKNOTTY problem faced the East-Midland Licens ing Authority when he had to decide who should operate a new service from Nottingham to Clifton. The new housing estate which prompted the application is well away from the centre of the city, in an area which was included in the municipal boundaries only six months before the application was made.

Except for some anciently held meadows round Trent Bridge, the river had always been Notting ham's southern boundary. The main road to Clifton passes through West Bridgford, which has its own bus undertaking, and the district is served also by the South Notts Bus Co. and by Barton Transport, Ltd.

The Authority gave 75 per cent. of the times on the new service to the two municipal undertakings and the remainder to the South Notts concern, also fixing the through fare on the corporation buses at 5d. and on the company vehicles at 4d. On appeal, this decision was upheld by the Minister of Transport.

This case has revived two old discussions of which little has been heard lately—the question of protection for existing undertakings and the even more thorny problem of whether a municipality should automatically have the right to serve any housing estates it builds, whether or not another operator already has services going to or near the area.

These two matters can be considered together, although the question of protection can arise in many cases other than those where new housing development occurs. One can think of a service being started between A and B, 30 miles apart, and passing in its course over the local routes of say, two other operators. Thirty years ago it was common to find bus services being imposed in such a way on tram roirtes. In such a case, bus passengers could not be picked up and set down in the area of either tramway undertaking.

There were many similar arrangements, but as the years went by, the prohibition of picking up and setting down tended to be replaced by the institution of a high minimum fare on those portions of the routes covered by local services. When the trams disappeared, the parties concerned seem, in many instances, to have overlooked the fact that as well as protecting the trams, the minimum safeguarded long-distance passengers against the possibility of being crowded off the buses by shortdistance riders, They accordingly withdrew it.

In some districts common fares were introduced because of local pooling schemes; in others the company operators paid the municipality their in-town receipts, less working expenses. In either instance the operators' interests were preserved, but it is doubtful whether the arrangements were fair to the long-distance passenger, especially when the bus on a long route is running on an infrequent headway. It is difficult to appreciate why minimum fares out of a town should be thought incompatible with a pooling agreement.

Pooling the Solution The principle of pooling and working to unified timetables, whenever possible, is commendable and such a plan may often be the solution of the question of the rights of municipalities within their own boundaries. There must be some limit to the extent to which councils can claim the right to operate to estates which they may build.

If the London Passenger Transport Board had never been set up and the London County Council had received powers to convert their tramways to bus operation, would they automatically have had the right to run to and in Harlow, Stevenage and the other new towns to which Londoners are to be " decanted? " This imaginary example may before long find a real counterpart in the case of Birmingham, Liverpool, Glasgow and other cities.

The municipalities which build the new estates outside their borders through sheer lack of land within them, will naturally want some say in the services to be provided. When (as in the case of Clifton) the new housing is brought within the city by a boundary extension, a fight with existing operators will be avoided only by tactful discussion to explore the possibilities of joint operation and pooling.

Protection such as that given to the companies in the Clifton case is of little value What is a penny these days? If the corporation fares were double those of the companies the protection would have some substance, but the result would be most unfair to the residents. A placeought to be found in pooling schemes for protective fares where really long-distance services are run, but in the case of purely suburban routes, an effective pooling scheme without fare differentiation should give all parties—including the passengers—a square deal.