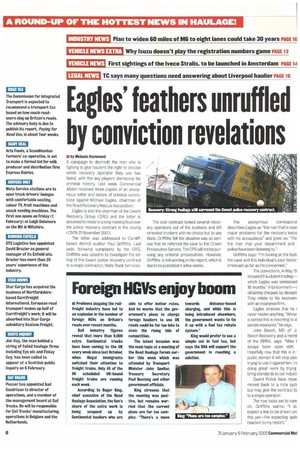 Page 6, 31st January 2002 — Eagles' feathers unruffled conviction revelations
Close
Noticed an error?
If you've noticed an error in this article please click here to report it so we can fix it.
Keywords : Gwent, Griffiths

• by Melanie Hammond A campaign to discredit the man who is fighting to give hauliers the right to choose which recovery operator they use has failed, with the key players dismissing his criminal history. Last week Commercial Motor received three copies of an anonymous letter and details of criminal convictions against Michael Eagles, chairman of the Road Recovery Rescue Association.

Eagles is also the chairman of the Gwent Recovery Group (GAG) and the letter is assumed to relate to a long-running feud over the police recovery contract in the county (CM15-21 November 2001), The letter was addressed to Cardiffbased district auditor Paul Griffiths. Last year, following complaints by the GRG, Griffiths was called in to investigate the letting of the Gwent police recovery contract to a single contractor, Walls Truck Services. The sole contract locked several recovery operators out of the business and left stranded truckers with no choice but to use Walls. Griffiths felt the situation was so serious that he referred the case to the Crown Prosecution Service. The CPS will not be pursuing any criminal prosecutions. However, Griffiths is still working on his report, which is due to be published in a few weeks. The anonymous correspond

describes Eagles as 'the man that is caus major problems for the recovery indus with his accusations" and goes on: "Thi: the man that your department and police have been listening to."

Griffiths says: "I'm looking at the factt the case and this individual's past histor: irrelevant as far as I'm concerned."

The convictions, in May 19 included fraudulent trading— which Eagles was sentenced 18 months' imprisonment obtaining cheques by decepti They relate to his involvem with an insurance firm.

Eagles stresses that he never hidden anything. 'Whoe, is behind this is resorting to d perate measures," he says.

John Beech, MD of Beech Recovery and a memt of the RRRA, says: "Mike t always been open with Hopefully now that this is in public domain it will stop peo trying to use it against him. Hi doing great work by trying bring standards to our industr Gwent Police have recer moved back to a rota systi but may give the contract bkr to a single operator.

The row looks set to rum on. Griffiths warns: "I be expect a line to be drawn um this yet—I'm expecting quitE reaction to my report."