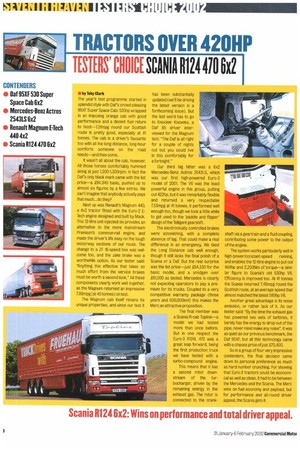 The year's test programme started in splendid style with Oaf's crowd-pleasing 95XF Super Space Cab: 530hp wrapped in an imposing orange cab with good performance and a decent fuel return to boot-7.51mpg round our Scottish route is pretty good, especially at 41 tonnes. The cab is a driver's favourite too with all the long-distance, long-hour comforts someone on the road needs—and then some.

It wasn't all about the cab, however. All those horses comfortably hummed along at just 1,200-1,300rpm. In fact the Daf's only black mark came with the list price—a £94,940 basic, pushed up to almost six figures by a few extras. We can't imagine that anybody actually pays that much...do they?

Next up was Renault's Magnum 440, a 4x2 tractor fitted with the Euro-2 ETech engine designed and built by Mack. This 12-litre unit-injected six provides an alternative to the more mainstream Premium's common-rail engine, and made the driver's life easy on the tough motorway sections of our route, The change to a ZF 16-speed box was welcome too, and the Jake brake was a worthwhile option. As our tester said: "Anything this effective that takes so much effort from the service brakes must be worth a second look." All these components clearly work well together, as the Magnum returned an impressive 7.88mpg (at 40 tonnes Ion test.

The Magnum cab itself retains its unique properties, and since our test it has been substantially updated (we'll be driving the latest version in a forthcoming issue). But the last word has to go to Knocker Knowles, a Oaf 85 driver interviewed for the Magnum test: "The Oaf is all right for a couple of nights out but you could live in this comfortably for a fortnight."

Our third big hitter was a 6x2

Mercedes-Benz Actros 2543LS, which was our first high-powered Euro-3 model of 2001. The V6 was the least powerful engine in this group, putting out 422hp, but it was remarkably flexible and returned a very respectable 7.53mpg at 41 tonnes. It performed well enough too, though we took a little while to get used to the 'paddle and flipper' design of the Telligent gearshift.

The electronically controlled brakes were astonishing, with a complete absence of lag. That could make a real difference in an emergency. We liked the Long Distance cab well enough, though it still lacks the final polish of a Scania or a Dar. But the real surprise was the list price—just £54,530 for the basic model, and a smidgen over £61,000 as tested. Mercedes is clearly not expecting operators to pay a premium for its trucks. Coupled to a very competitive warranty package (three years and 600,000km!) this makes the Mere an attractive proposition.

The final member was a Scania R-cab Topline—a model we had tested more than once before. But in one respect the Euro-3 R124L 470 was a great leap forward, being the first production truck we have tested with a turbo-compound engine.

This means that it has a second rotor downstream of the turbocharger, driven by the remaining energy in the exhaust gas. The rotor is connected to the crank shaft via a geartrain and a fluid coupling, contributing some power to the output of the engine.

The system works particularly well in

high-power/constant-speed running, and enables the 12-litre engine to put out 464hp and 2,200Nm of torque—a similar figure to Scania's old 530hp V8. Efficiency is improved too. At 41 tonnes the Scania returned 7.45mpg round the Scottish route, at an average speed that almost matched the latest 580hp VB.

Another great advantage is its noise emission, or rather lack of it. As our tester said: "By the time the exhaust gas has powered two sets of turbines, it barely has the energy to drop out of the pipe, never mind make any noise". It was as quiet as our previous benchmark, the Daf 95XF, but all this technology came with a chassis price ofjust £70,400.

So in a group of four very impressive contenders, the final decision came down to personal preference as much as hard number crunching. For showing that Euro-3 tractors could be economical as well as clean, it had to be between the Mercedes and the Scene The Mere wins on fuel economy and payload, but for performance and all-round driver appeal, the Scania gets it.