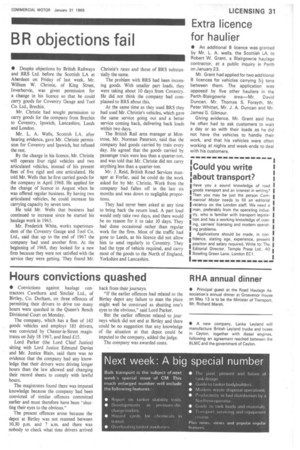 • An additional B licence was granted by Mr. L A. wells, the Scottish LA, to Robert W. Grant. a Blairgowrie haulage contractor, at a public inquiry in Perth on January 23.

Mr. Grant had applied for two additional B licences for vehicles carrying 5+ tons between them. The application was opposed by five other hauliers in the

Giving evidence, Mr. Grant said that he often had to ask customers to wait a day or so with their loads as he did not have the vehicles to handle their work, and that his vehicles were often working at nights and week-ends to deal with his customers.