A TASC force for transport 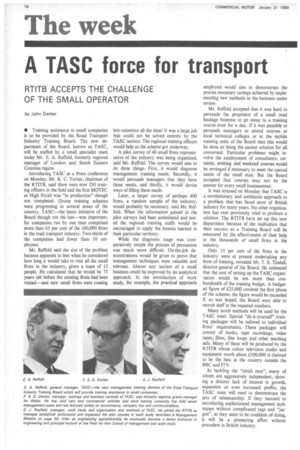 Page 20, 31st January 1969 — A TASC force for transport
Close
Noticed an error?
If you've noticed an error in this article please click here to report it so we can fix it.
Keywords :

RTITB ACCEPTS THE CHALLENGE OF THE SMALL OPERATOR

by John Darker • Training assistance to small companies is to be provided by the Road Transport Industry Training Board. The new department of the Board, known as TASC, will be staffed by a small specialist team under Mr. E. A. Reffold, formerly regional manager of London and South Eastern Counties region.

Introducing TASC at a Press conference on Monday, Mr. K. C. Turner, chairman of the RTITB, said there were now 250 training officers in the field and the first MOTEC at High Ercall was "in production" though not completed. Group training schemes were progressing in several areas of the country. TASC—the latest initiative of the Board though not the last—was important, for companies run by one man comprised more than 65 per cent of the 100,000 firms in the road transport industry. Two-thirds of the companies had fewer than 10 employees.

Mr. Reffold said the size of the problem became apparent to him when he considered how long it would take to visit all the small firms in the industry, given a team of 12 people. He calculated that he would be 75 years old before the existing firms had been visited—and new small firms were coming into existence all the time! It was a large job that could not be solved entirely by the TASC section. The regional training officers would help as the scheme got underway.

A pilot survey of 40 small firms representative of the industry was being organized, said Mr. Reffold. The survey would aim to do three things. First, it would diagnose management training needs. Secondly, it would persuade managers that they have these needs, and thirdly, it would devise ways of filling these needs.

Later, a larger survey of perhaps 400 firms, a random sample of the industry, would probably be necessary, said Mr. Reffold. When the information gained in the pilot surveys had been assimilated and tested the regional training staffs would be encouraged to apply the lessons learned in their particular territory.

While the diagnosis stage was comparatively simple the process of persuasion was much more difficult. On-the-job demonstrations would be given to prove that management techniques were valuable and relevant. Almost any section of a small business could be improved by an analytical approach. In the introduction of work study, for example, the practical approach employed would aim to demonstrate the precise monetary savings achieved by implementing new methods in the business under review.

Mr. Reffold accepted that it was hard to persuade the proprietor of a small road haulage business to go away to a training course even for a day. If it was possible to persuade managers to attend courses at local technical colleges or at the mobile training units of the Board then this would be done as being the easiest solution for all concerned. Particular problems might involve the employment of consultants; certainly, evening and weekend courses would be arranged if necessary to meet the special needs of the small man. But the Board accepted that courses may not be the answer for every small businessman.

It was stressed on Monday that TASC is a revolutionary and ambitious approach to a problem that has faced most of British industry for many years. No other organization has ever previously tried to produce a solution. The RTITB have set up this new department because of the realization that their success as a Training Board will be measured by the effectiveness of their help to the thousands of small firms in the industry.

Only 15 per cent of the firms in the industry were at present undertaking any form of training, revealed Mr. T. E. Tindall, director-general of the Board. He estimated that the cost of setting up the TASC organization would be not more than onehundredth of the training budget. A budgeted figure of £25,000 covered the first phase of the scheme; the figure would be exceeded if, as was hoped, the Board were able to recruit staff in the required numbers.

Many novel methods will be used by the TASC team. Special "do-it-yourself" training packages will be tailored to individual firms' requirements. These packages will consist of books, tape recordings, video tapes, films, film loops and other teaching aids. Many of these will be produced by the RTITB whose colour television studio and equipment worth about £500,000 is claimed to be the best in the country outside the BBC and ITV.

In tackling the "small men", many of whom are aggressively independent, showing a distinct lack of interest in growth, expansion or even increased profits, the TASC team will need to demonstrate the arts of salesmanship. If they succeed in introducing sophisticated management techniques without complicated tags and "jargon", as they seem to be confident of doing, it will be a pioneering effort without precedent in British industry.