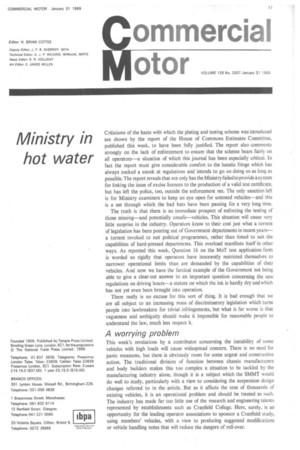 Page 19, 31st January 1969 — Ministry in hot water
Close
Noticed an error?
If you've noticed an error in this article please click here to report it so we can fix it.

Criticisms of the haste with which the plating and testing scheme was introduced are shown by the report of the House of Commons Estimates Committee, published this week, to have been fully justified. The report also comments strongly on the lack of enforcement to ensure that the scheme bears fairly on all operators—a situation of which this journal has been especially critical. In fact the report must give considerable comfort to the lunatic fringe which has always cocked a snook at regulations and intends to go on doing so as long as possible. The report reveals that not only has the Ministry failed to provide a system for linking the issue of excise licences to the production of a valid test certificate, but has left the police, too, outside the enforcement net. The only sanction left is for Ministry examiners to keep an eye open for untested vehicles—and this is a net through which the bad hats have been passing for a very long time.

The truth is that there is no immediate prospect of enforcing the testing of those missing—and potentially unsafe—vehicles. This situation will cause very little surprise in the industry. Operators know to their cost just what a torrent of legislation has been pouring out of Government departments in recent years a torrent invoked to suit political programmes, rather than timed to suit the capabilities of hard-pressed departments. This overload manifests itself in other ways. As reported this week, Question 16 on the MoT test application form is worded so rigidly that operators have innocently restricted themselves to narrower operational limits than are demanded by the capabilities of their vehicles. And now we have the farcical example of the Government not being able to give a clear-cut answer to an important question concerning the new regulations on driving hours a statute on which the ink is hardly dry and which has not yet even been brought into operation.

There really is no excuse for this sort of thing. It is bad enough that we are all subject to an increasing mass of discriminatory legislation which turns people into lawbreakers for trivial infringements, but what is far worse is that vagueness and ambiguity should make it impossible for reasonable people to understand the law, much less respect it.

This week's revelations by a contributor concerning the instability of some vehicles with high loads will cause widespread concern. There is no need for panic measures, but there is obviously room for some urgent and constructive action. The traditional division of function between chassis manufacturers and body builders makes this too complex a situation to be tackled by the manufacturing industry alone, though it is a subject which the SMMT would do well to study, particularly with a view to considering the suspension design changes referred to in the article. But as it affects the tens of thousands of existing vehicles, it is an operational problem and should be treated as such. The industry has made far too little use of the research and engineering talents represented by establishments such as Cranfield College. 'Here, surely, is an opportunity for the leading operator associations to sponsor a Cranfield study, using members' vehicles, with a view to producing suggested modifications or vehicle handling notes that will reduce the dangers of roll-over.