Many Objections to Tours Revival Bid 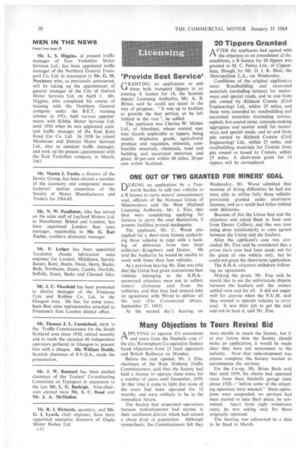 Page 32, 31st January 1964 — Many Objections to Tours Revival Bid
Close
Noticed an error?
If you've noticed an error in this article please click here to report it so we can fix it.
Keywords : Business / Finance

A PPLYING to operate 131 excursions 1-1 and tours from the Nechells area of the city, Birmingham Co-operative Society faced objections from 15 local operators and British Railways on Monday.

Before the case opened, Mr. J. Else, chairman of the West Midland Traffic Commissioners, said that the Society had held a licence to operate these tours for a number of years until December, 1959. At that time it came to light that none of the tours had been operated for 12 months, and were unlikely to be in the immediate future.

The Society had suspended operations because redevelopment had started in their catchment district which had caused a sharp drop in population. Although sympathetic, the Commissioners felt they were unable to renew the licence, but if at any future date the Society should make an application, it would be made clear they were not newcomers to the industry. Now that redevelopment was almost complete, the Society wanted to recommence the services.

For the Co-op, Mr. Brian Bush said that until 1959, his clients had operated tours from their Neehells garage since about 1920—" before some of the objecting operators were weaned." Since operations were suspended, no services had been started to take their place, hesubmitted. Apart from eight withdrawn tours, he was asking only for those originally operated.

The hearing was adjourned to a date to be fixed in March.