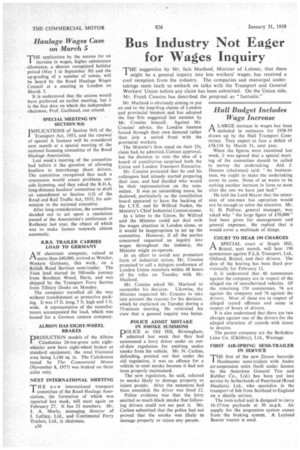 Page 32, 31st January 1958 — Haulage Wages Case on March 5
Close
Noticed an error?
If you've noticed an error in this article please click here to report it so we can fix it.
Keywords : Trucks, Articulated Vehicles, Semi-trailer, Trailer, Rail Transport

THE application by the unions for an increase in wages, higher subsistence allowance, a shorter recognized holiday period (May 1 to Septembet 30) and the up-grading of a number of towns, will be heard by the Road Haulage Wages Council at a _meeting in London on March 5.

It is understood that the unions would have preferred an earlier meeting, but it is the first date on which the independent chairman, Prof. Guilbaud, can attend. .

SPECIAL MEETING ON SECTION 9(4) I MPLICATIONS of Section 9(4) of the Transport Act, 1953, and the renewal of special A licences will be considered next month at a special meeting of the national licensing committee of the Road Haulage Association.

Last week's meeting of the committee had before it the question of allowing hauliers to interchange shunt drivers. The committee recognized that such a concession would create problems outside licensing, and they asked the R.H.A. long-distance hauliers' committee to draft an amendment to Section 1(3) of the Road and Rail Traffic Act, 1933, for submission to the national executive.

After long consideration, the committee decided not to act upon a resolution passed at the Association's conference at Rothesay last year, the object of which was to make licence renewals almost automatic.

AN electronic computer, valued at more than £40,000, arrived at Wetzlar, Western Germany, this week, on a British Road Services semi-trailer. The 3-ton load started its 500-mile journey from Boreham Wood, lierts, and was shipped by the Transport Ferry Service from Tilbury Docks on Monday.

The computer travelled all the way without transhipment or protective packing. It was 17 ft. long, 7 ft. high and 3 ft. wide. A representative of the manufacturers accompanied the load, which was bound for a German camera company.

PRODUCTION models of the Albion Caledonian 24-ton-gross solo eightwheeler now have eight-wheel brakes as standard equipment, the total frictional area being 1,140 sq. in. The Caledonian tested by The Commercial Motor (November 8, 1957) was braked on three axles only.

THE new international transport committee of the Road Haulage Association, the formation of which was reported last week, will meet again on February 27. It has 23 members. Mr. J. A. Murly, managing director of I. Leftley, Ltd., and Continental Ferry Trailers, Ltd., is chairman.