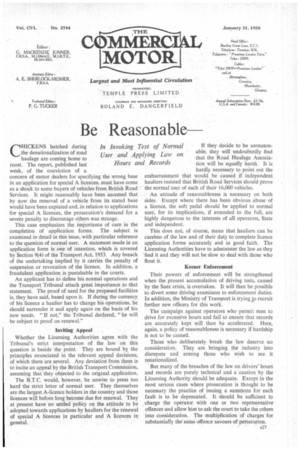 Page 29, 31st January 1958 — Be Reasonable
Close
Noticed an error?
If you've noticed an error in this article please click here to report it so we can fix it.

CHICKENS hatched during the denationalization of road haulage are coming home to roost. The report, published last week, of the conviction of a concern of motor dealers for specifying the wrong base in an application for special A licences, must have come as a shock to some buyers of vehicles from British Road Services. It might reasonably have been assumed that by now the removal of a vehicle from its stated base would have been expiated and, in relation to applications for special A licences, the prosecution's demand for a severe penalty to discourage others was strange.

This case emphasizes the importance of care in the completion of application forms. The subject is examined in detail in this issue, with particular reference to the question of normal user. A statement made in an application form is one of intention, which is covered by Section 9(4) of the Transport Act, 1951 Any breach of the undertaking implied by it carries the penalty of suspension or revocation of the licence. In addition, a fraudulent application is punishable in the courts.

An applicant has to define his normal operations and the Transport Tribunal attach great importance to that statement. The proof of need for the proposed facilities is, they have said, based upon it. If during the currency of his licence a haulier has to change his operations, he should surrender it and apply again on the basis of his new needs. "If not," the Tribunal declared, "he will be subject to proof on renewal."

Inviting Appeal Whether the Licensing Authorities agree with the Tribunal's strict interpretation of the law on this question is beside the point. They are bound by the principles enunciated in the relevant appeal decisions, of which there are several. Any deviation from them is to incite an appeal by the British Transport Commission, assuming that they objected to the original application.

The B.T.C. would, however, be unwise to press too hard the strict letter of normal user. They themselves are the largest A-licence holders in the country and those licences will before long become due for renewal. They at present have no settled policy on the attitude to be adopted towards applications by hauliers for the renewal of special A licences in particular and A licences in general. If they decide to be unreasonable, they will undoubtedly find that the Road Haulage Association will be equgly harsh. It is hardly necessary to point out the embarrassment that would be caused if independent hauliers insisted that British Road Services should prove the normal user of each of their 16,000 vehicles.

An attitude of reasonableness is necessary on both sides. Except where there has been obvious abuse of a licence, the soft pedal should be applied to normal user, for its implications, if extended to the full, are highly dangerous to the interests of all operators. State and independent.

This does not, of course, mean that hauliers can be careless of the law and of their duty to complete licence application forms accurately and in good faith. The Licensing Authorities have to administer the law as they find it and they will not be slow to deal with those who flout it.

Keener Enforcement Their powers of enforcement will be strengthened when the present accumulation of driving tests, caused by the Suez crisis, is overtaken. It will then be possible to divert some driving examiners to enforcement duties. In addition, the Ministry of Transport is trying so recruit further new officers for this work.

The campaign against operators who permit men to drive for excessive hours and fail to ensure that records are accurately kept will then be accelerated. Here, again, a policy of reasonableness is necessary if hardship is not to be caused.

Those v./J.10 deliberately break the law deserve no consideration. They are bringing the industry into disrepute and arming those who wish to see it renationalized.

But many of the breaches of the law on drivers' hours and records are purely technical and a 'caution by the Licensing Authority should be adequate. Except in the most serious cases where prosecution is thought to be necessary the practice of issuing a summons for each fault is to be deprecated. It -should be sufficient to charge the operator with one or two representative offences and allow him to ask the court to take the others into consideration. The multiplication of charges for substantially the same offence savours of persecution.