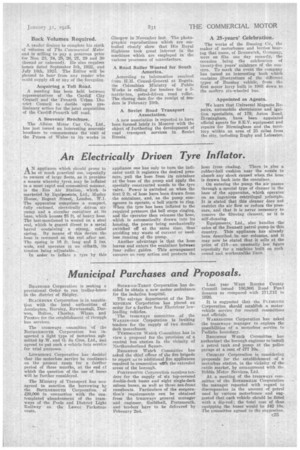 BRADFORD Corporation is seeking a provisional Order to run trolley-buses in the district of Shipley.

BLACKBURN Corporation is in negotiation with the local authorities of Accrington, Burnley, Rawtenstall, Dar. wen, Bolton, Chorley, Wigan and Preston for the establishment of through bus services.

The tramways . committee of the BOURNEMOUTH Corporation has inspected a light type of motorbus submitted by W. and 0: du Cros, Ltd., and agreed to put such a vehicle into serviae for trial purposes.

LOWESTOFT Corporation has decided that the motorbus service be continued on the present route for a further period of three months, at the end ef which the question of the use of buses will be further considered.

The Ministry of Transport has nonagreed to sanction the borrowing by the BOURNEMOUTH Corporation Of £20,000 in connection with the contemplated abandonment of the tramways of the Poole and District Light. Railway on the Lower Parkstone route. STOKE-ON-TRENT Corporation has decided to obtaina new motor ambulance for the isolation hospital.

The salvage department of the BiaLIN GRAM Corporation has placed an order for a further four Electricar lowloading .vehicles.

The tramways committee of the WARRIN TON Corporation is inviting tenders for the supply of two doubledeck motorbuses.

TYNEMOUTH Watch Committee has in view a proposal for the provision of a central bus station in the vicinity of Northumberland Square.

Barearroat Watch Committee has asked the chief officer of the fire brigade to report as to additional fire appliances required in connection with the extended areas of the borough, PORTSMOUTH Corporation requires tenders for the supply of six top-covered double-deck buses and eight single-deck saloon buses, as well as three sea-front runabouts. Particulars of the corporation's requirements can be obtained from the tramways general manager and engineer, Guildhall, Portsmouth, and tenders have to be delivered by February 2nd.

it is suggested that the PL YMOUTII Corporation should establish a motorvehicle service for council committees and officials.

WARTLIN GTON Corporation has asked the tramwayS• manager to explore the pbssibilities of a motorbus service to Padlake boundary. •

BR/GHTON Watch Committee has authorized the borough engineer to install a petrol tank and pump at the police garage at a cost of £77 10s.

CHORLEY Corporation is considering proposals far the establishment of a motorbus station, in the vicinity of the cattle market, by arrangement with the Ribble Motor Services, Ltd.

At a meeting of the tramways come. .mittee of the ROTHERHAM Corporation the manager reported with regard to discrepancies in the amount of petrol used by various motorbuses and suggested that each vehicle should be fitted with a dip-rod; the total cost of thus equippifigthe buses would be £42 1.0s. The committee agreed to the suggestion.