COLOMBO TRANSPORT . CORPORATION WITH a capital of about Rs.20m., 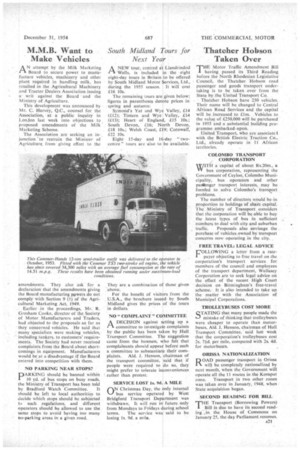 Page 23, 31st December 1954 — COLOMBO TRANSPORT . CORPORATION WITH a capital of about Rs.20m.,
Close
Noticed an error?
If you've noticed an error in this article please click here to report it so we can fix it.

a vY bus corporation, representing the Government of Ceylon, Colombo Municipality, bus operators and other paseenger transport interests, may be forrded to solve Colombo's transport problems.

The number of directors would be in proportion to holdings of shafe capital. The Ministry of Transport considers that the corporation will be able to buy the latest types of bus in sufficient numbers to deal with city and suburban traffic. Proposals also envisage the , purchase of vehicles owned by transport concerns now operating in the city..