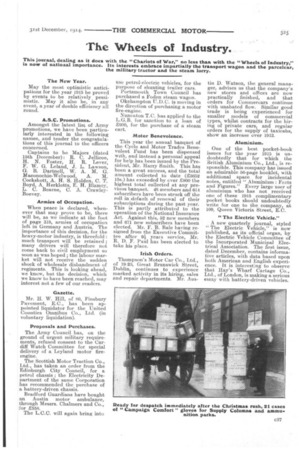 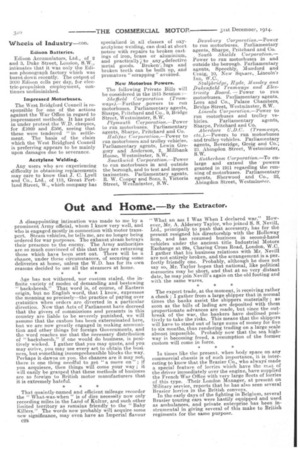 This journal, dealing as it does with the "Chariots of War," no less than with the "Wheels of Industry," is now of natioaal importance. Its interests embrace impartially the transport wagon and the parcelcar, the military tractor and the steam lorry.

May the most optimistic anticipations for the year 1915 be proved by events to be relatively pessimistic. May it also be, in any event, a year of double efficiency all round.

Amongst the latest list, of Army promotions, we have been particularly interested in the following names, and tender the congratulations of this journal to the officers concerned.

When peace is declared, whenever that may prove to be, there will be, as we indicate at the foot of page 318, armies of occupation left in Germany and Austria. The importance of this decision, for the heavy-motor industry, is threefold : much transport will be retained ; many drivers will therefore not come back to civil employment so soon as was hoped ; the labour market will not receive the sudden shock of wholesale disbandment of regiments. This is looking ahead, we know, but the decision, which we know to have been reached, may interest not a few of our readers.

The Army Council has, on the ground of urgent military requirements, refused consent to the Cardiff Watch Committee for special delivery of a Leyland motor fireengine.

The Scottish Motor Traction Co., Ltd., has taken an order from the Edinburgh City Council, for a petrol chassis ; the Electricity Department of the same Corporation has recommended the purchase of a battery-driven chassis.

Bradford Guardians have bought an Austin motor ambulance, through Messrs. Chalmers and Co., for £558.

The L.C.C. will again bring into use petrol-electric vehicles, for the purpose of shunting trailer cars. Portsmouth Town Council has purchased a Foden steam wagon. Okehampton U.D.C. is moving in the direction of purchasing a motor fire-engine.

Nuneaton T.C. has applied to the L.G.B. for sanction to a loan of £600, for the purchase of a steam cart.

This year the annual banquet of the Cycle and Motor Trades Benevolent Fund has been dispensed with, and instead a personal appeal for help has been issued by the President, Mr. Harry Smith. This has been a great success, and the total amount collected to date (23652 15s.) has exceeded by over 2800 the highest total collected at any previous banquet. 48 members and 614 subscribers have been struck off the roll in default of renewal of their subscriptions during the past year. This is partly attributed to the operation of the National Insurance Act. Against this, 52 new members and 671 new subscribers have been elected. Mr. F. B. Bale having resigned from the Executive Committee after 91 years service, Mr. R. D. F. Paul has been elected to take his place.

Thompson's Motor Car Co., Ltd., of 19-20, Great Brunswick Street, Dublin, continues to experience marked activity in its hiring, sales and repair departments. Mr. Aus tin D. Watson, the general manager, advises us that the company's new stores and offices are now practically finished, and that orders for Commercars continue with unabated flow. Similar good trade is being experienced for smaller models of commercial types, whilst contracts for the hiring of private cars, and regular orders for the supply of taxicabs, show an increase over 1913.

One of the best pocket-book issues for the year 1915 is undoubtedly that for which the British Aluminium Co., Ltd., is responsible. This company has issued an admirable 56-page booklet, with additional space for incidental notes, entitled " Aluminium : Facts and Figures." Every large user of aluminium who has not received one of these 1915 complimentary pocket books should undoubtedly write for one to the company, at 109, Queen Victoria Street, E.C.

A new quarterly journal, styled " The Electric Vehicle," is now published, as its official organ, by the Electric Vehicle Committee of the Incorporated Municipal Electrical Association. The first issue, dated December, contains informative articles, with data based upon both American and English experience. It is interest's/1g to observe that Hay's Wharf Cartage Co., Ltd., of London, is making a serious essay with battery-driven vehicles.

Edison Accumulators, Ltd., of 2 and 3, Duke Street, London, S.W., intimates that it was only the Edison phonograph factory which was burnt down recently. The output of 3000 Edison cells per day, for electric-propulsion employment, continues undiminished.

Any users who are experiencing difficulty in obt,aining replacements may care to know that I. C. Lyell and Co., Ltd., of 113, Great Portland Street, W., which company has

specialized in all classes of oxyacetylene welding, can deal at short; notice with repairs to broken castings of iron, brass or aluminium, and practically to any},rdefective metal goods. Broken', lugs and broken teeth can be built up, and premature" scrapping" avoided.

leotherham Corporation.—To enlarge and extend the • powers granted in 1911 regarding the running of motorbuses. Parliamentary agents, Sherwood and Co., 22, Abingdon Street, Westminster.