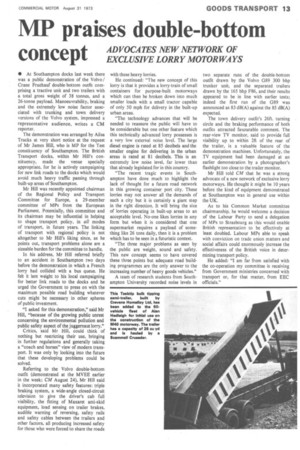 • At Southampton docks last week there was a public demonstration of the Volvo / Crane Fruehauf double-bottom outfit comprising a tractive unit and two trailers with a total gross weight of 38 tonnes, and a 26-tonne payload. Manoeuvrability, braking and the extremely low noise factor associated with trunking and town delivery versions of the Volvo system, impressed a representative audience, writes a CM reporter.

The demonstration was arranged by Ailsa Trucks at very short notice at the request of Mr James Hill, who is MP for the Test constituency of Southampton. The British Transport docks, within Mr Hill's constituency, made the venue specially appropriate, for he is actively campaigning for new link roads to the docks which would avoid much heavy traffic passing through built-up areas of Southampton.

Mr Hill was recently appointed chairman of the Regional Policy and Transport Committee for Europe, a 29-member committee of MPs from the European Parliament. Potentially, this committee and its chairman may be influential in helping to shape transport policy, in all modes of transport, in future years. The linking of transport with regional policy is not altogether to Mr Hill's liking since, as he points out, transport problems alone are a sizeable burden for the committee to handle.

In his address, Mr Hill referred briefly to an accident in Southampton two days before the demonstration in which a French lorry had collided with a bus queue. He felt it lent weight to his local campaigning for better link roads to the docks and he urged the Government to press on with the maximum possible road building whatever cuts might be necessary in other spheres of public investment.

"I asked for this demonstration," said Mr Hill, "because of the growing public unrest concerning the environmental pollution and public safety aspect of the juggernaut lorry."

Critics, said Mr Hill, could think of nothing but restricting their use, bringing in further regulations and generally taking a "coach and horses" view of modern transport. It was only by looking into the future that these developing problems could be solved, Referring to the Volvo double-bottom outfit (demonstrated at the MVEE earlier in the week; CM August 24), Mr Hill said it incorporated many safety features: triple braking system, a wide-angle closed-circuit television to give the driver's cab full visibility, the fitting of Maxaret anti-skid equipment, load sensing on trailer brakes, audible warning of reversing, safety rails and safety cables between the trailers and other factors, all producing increased safety for those who were forced to share the roads with these heavy lorries.

He continued: "The new concept of this lorry is that it provides a lorry-train of small containers for purpose-built motorways which can then be broken down into much smaller loads with a small tractor capable of only 50 mph for delivery in the built-up urban areas.

"The technology advances that will be needed to reassure the public will have to be considerable but one other feature which this technically advanced lorry possesses is a very low external noise level. The large diesel engine is rated at 85 decibels and the smaller engine for delivering in the urban areas is rated at 81 decibels. This is an extremely low noise level, far lower than that already legislated for in this country.

"The recent tragic events in Southampton have done much to highlight the lack of thought for a future road network in this growing container port city. These lorries may not answer all the demands of such a city but it is certainly a giant step in the right direction. It will bring the size of lorries operating in built-up areas to an acceptable level. No-one likes lorries in any form but when it is considered that one supermarket requires a payload of something like 26 tons daily, then it is a problem which has to be seen in a futuristic context.

"The three major problems as seen by the public are weight, sound and safety. This new concept seems to have covered these three points but adequate road building programmes are the only answer to the increasing number of heavy goods vehicles."

A team of research students from Southampton University recorded noise levels in two separate runs of the double-bottom outfit drawn by the Volvo G89 300 bhp trunker unit, and the separated trailers drawn by the 165 bhp F86, and their results appeared to be in line with earlier tests; indeed the first run of the G89 was announced as 83 dB(A) against the 85 dB(A) expected.

The town delivery outfit's 26ft. turning circle and the braking performance of both outfits attracted favourable comment. The rear-view TV monitor, said to provide full visibility up to within 2ft of the rear of the trailer, is a valuable feature of the demonstration machines. Unfortunately, the TV equipment had been damaged at an earlier demonstration by a photographer's flashlight too close to the trailer monitor.

Mr Hill told CM that he was a strong advocate of a new network of exclusive lorry motorways. He thought it might be 10 years before the kind of equipment demonstrated at Southampton was in general use within the UK.

As to his Common Market committee chairmanship, he would welcome a decision of the Labour Party to send a delegation of MPs to Strasbourg as this would enable British representation to be effectively at least doubled. Labour MPs able to speak with conviction on trade union matters and social affairs could enormously increase the effectiveness of the British voice in determining transport policy.

He added: "I am far from satisfied with the co-operation my committee is receiving from Government ministries concerned with transport or, for that matter, from EEC officials."