SEATING THE PASSENGERS ON AIR. 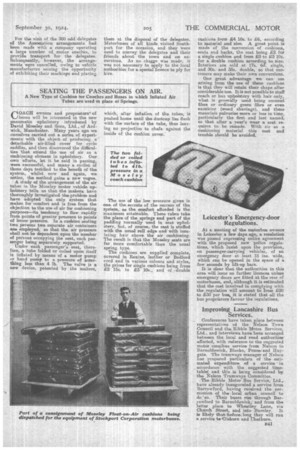 Page 23, 30th September 1924 — SEATING THE PASSENGERS ON AIR.
Close
Noticed an error?
If you've noticed an error in this article please click here to report it so we can fix it.

' A New Type of Cushion tor Coaches and Ruses In X.bleti Inflated Air

Tubes are used in place of Springs.

COACH owners and proprietorscof ‘.../buses will be interested in the new pneumatic upholstery introduced by David Moseley and Sons, Ltd., of Andwick, Manchester. Many years ago we ourselves carried out a series of experiments with the object of producing, a detachable air-filled cover for cycle saddles, and then discovered the difficulties that attend the use of air as a cushioning element in upholstery. Our own efforts, let it be said in passing, were successful, and many a cyclist of those days testified to the benefit of the system, whilst now and again, we notice, the method gains a new vogue.

A study of the arrangement of the air tubes in the Moseley motor vehicle upholstery tells us that the makers have thoroughly investigated the problem and have adopted the only system that makes for comfort and is free from the objection to the use of air for cushioning purposes—its tendency to flow rapidly from points of greater pressure to points of lesser pressure. In a cushion seating two persons two separate air containers are employed, so that the air pressure shall not be dependent upon the number of persons occupying the seat, each passenger being separately supported.

Under each passenger's seat, therefore, a tube folded or coiled upon itself is inflated by means of a motor pump or hand pump to a pressure of something less than 4 lb. The valve is a new device, patented by the makers, which, after inflation of the tubes, is pushed home until the dustcap lies flush with the surface of the tube, thus leaving no projection to chafe against the inside of the cushion cover.

The use of the' low pressure given is one of the secrets of the success of the system, as the comfort afforded is the maximum attainable. These tubes take the place of the springs and part of the padding normally used in seat upholstery, but, of course, the seat is stuffed with the usual roll edge and with insulating hair above the air cushioning. The result is that the Moseley seats are far more comfortable than the usual spring type.

The cushions are supplied complete, covered in Rexine, leather or Bedford cord and in various colours and styles, the prices for single cushions being from £2 15s. to £3 10s., and of . double

cushions from .£4 10s. to 26, according to material and size. A great point is made of the conversion of cushions, seats and backs, the cost being £2 for a single -cushion and from £3 to £3 10s. for a double cushion according to size. Interiors are sold at 1.7s. 611. single, and 30s. and 35s. double, so that customers may make their own conversions.

One great advantage -we can see arising from the use of these cushions is that they will retain their shape after considerable use. It is not possible to stuff coach or bus upholstery with hair only, what is generally used being coconut fibre or ordinary green fibre or even excelsior (wood shavings), and these materials pulverize more or less in time, particularly the first. and last named, so that after a year's wear a seat requires to be remade. With air as a cushioning material this cost and trouble should be avoided.

At a meeting of the motorbus owners in Leicester a few days ago, a resolution was passed expressing entire agreement with the proposed new police regulations, which insist upon the provision, on passenger-carrying vehicles, of an emergency door at /east 16 ins, wide, which can be opened in the apace of a few seconds by lift-up bars. It is clear that the authorities in this area Will issue no further licences unless emergency doors are fitted at the rear of motorbuses, and, although it is estimated that the cost involved in complying with the regulation will amount to from £20 to £30 per bus, it is stated that all the bus proprietors favour the regulations.

Conferences have taken place between representatives oi the Nelson Town Council and the Ribble 141-ot0i Services, Ltd., and interviews have been arranged between the local and road authorities affected, with reference to the suggested motor omnibus service from Nelson to Barnoldswick, Black°, Fence' and Hag.gate. The tramways manager of Nelson has prepared particulars of the estimated expenditure of a service 'in accordance with the suggested timetable: and this is being considered by the Nelson Tramways Committee. . The Ribble Motor Bus Service, Ltd., have already inaugurated a service from 13arrowford, having received the per• mission of thelocal urban council -to do'so. Their buses run through Barrowford to Barnoldswick; and from the latter place to Wheatley Lane, via Church .Street, and into Burnley. It is likely that 'before long they will run a service 'teisburn and Chalburn. B4I