Turning its back on traditional trunking, S&S has instead decided to focus on regional distribution in the South-East. 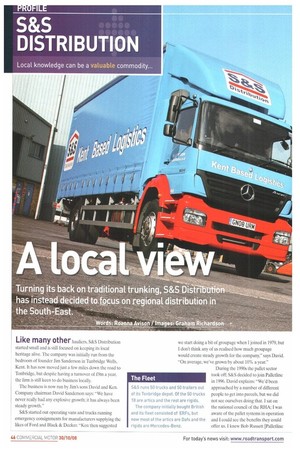 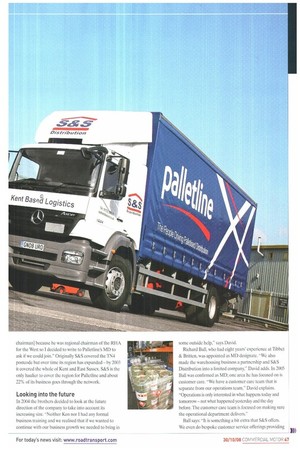 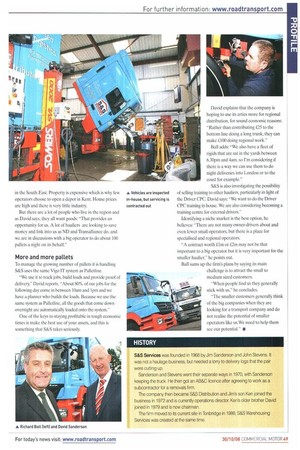 Page 46, 30th October 2008 — Turning its back on traditional trunking, S&S has instead decided to focus on regional distribution in the South-East.
Close
Noticed an error?
If you've noticed an error in this article please click here to report it so we can fix it.
Keywords : Technology, Business, Management, Supply Chain Management, Packaging, Logistics, Pallet, Warehouse, Fuel Card, Ford Motor Company, Business / Finance

Words: Roanna Avison / Images: Graham Richardson Like many other hauliers, S&S Distribution started small and is still focused on keeping its local heritage alive. The company was initially run from the bedroom of founder Jim Sanderson in Tunbridge Wells, Kent. It has now moved just a few miles down the road to Tonbridge, but despite having a turnover of £9m a year, the firm is still keen to do business locally.

The business is now run by Jim's sons David and Ken. Company chairman David Sanderson says: "We have never really had any explosive growth; it has always been steady growth."

S&S started out operating vans and trucks running emergency consignments for manufacturers supplying the likes of Ford and Black & Decker. "Ken then suggested we start doing a bit of groupage when I joined in 1979, but I don't think any of us realised how much groupage would create steady growth for the company," says David. "On average, we've grown by about 10% a year."

During the 1990s the pallet sector took off; S&S decided to join Palletline in 1996. David explains: "We'd been approached by a number of different people to get into parcels, but we did not see ourselves doing that. 1 sat on the national council of the RI-IA; I was aware of the pallet systems in operation and I could see the benefits they could offer us. I knew Bob Russett [Palletline chairman] because he was regional chairman of the RHA for the West so I decided to write to Palletline's MD to ask if we could join." Originally S&S covered the TN4 postcode but over time its region has expanded — by 2003 it covered the whole of Kent and East Sussex. S&S is the only haulier to cover the region for Palletline and about 22% of its business goes through the network.

Looking into the future In 2004 the brothers decided to look at the future direction of the company to take into account its increasing size. "Neither Ken nor I had any formal business training and we realised that if we wanted to continue with our business growth we needed to bring in some outside help," says David.

Richard Ball, who had eight years' experience at Tibbet & Britten, was appointed as MD designate. "We also made the warehousing business a partnership and S&S Distribution into a limited company," David adds. In 2005 Ball was confirmed as MD; one area he has focused on is customer care, We have a customer care team that is separate from our operations team," David explains. "Operations is only interested in what happens today and tomorrow— not what happened yesterday and the day before. The customer care team is focused on making sure the operational department delivers."

Ball says: "It is something a bit extra that S&S offers. We even do bespoke customer service offerings providing such things as progress report stats."

As with many other hauliers S&S does call on agency drivers to cover demand at peak times, but David stresses that this is on a limited basis: -We used quite a lot on the run-up to Christmas last year, hut this year we're really focused on reducing that to negligible levels." He adds that S&S carries a fair number of spare drivers because there is always someone on holiday or off sick, so there are seldom drivers left without anything to do.

S&S is not particularly loyal to any one marque when it comes to buying trucks at least not any more.

Best of British In it's early days Jim Sanderson insisted on buying British which resulted in a fleet of ERFs. "But most of our artics these days are Dafs, bought from Channel Commercials in Ashford." says David.

There aren't many dealers close to Tonbridge; the closest is Stormont Iveco in Hildenborough and S&S has just bought its first Iveco because of this.

"For maintenance purposes we have made an arrange ment with Daf that means we can do our own inspections, S&S employs about 110 staff, most of but we have to take the trucks to Daf for servicing," he whom are drivers, and it works for adds. The company's rigids are predominantly Mercedesabout 300 companies. It can also hold Benzes, bought from Sparshatts in Sittingboume. but they about 8,000 pallets in its warehouse.

have a repair facility at Kent & Sussex Trucks in TunThe operator delivers up to 600 bridge Wells. consignments every working day, "We have had a few trucks on contract hire, but ranging from one pallet to a full load.

generally we buy everything using hire purchase," David reports. "The artics do relatively high mileage, but the general margins on the artics are very low. That's why our artic fleet is shrinking and the rigid fleet is growing.

S&S has an 85,000-litre fuel tank on site and is part of the Imperial Oil Consortium which approaches the major oil companies and negotiates discounted rates for its members. The oil companies then set up accounts directly with the operators.

David says S&S has just started to issue drivers with fuel cards but because it is cutting back on general haulage the company may buy as little as 1.000 litres a week from the forecourts: "We have been concentrating on trying to reduce our mileage. Our regional delivery vehicles average 120 miles a day, while the artics do about 320 a day, excluding the

"We are trying to do more regional distribution all the time," he adds.

Even though S&S is trying to reduce its fuel usage to cut its overheads, David says fuel prices have not been too much of an issue for the company because it has fuel escalators in place: "We use the RHA average fuel price every week and send a copy of that to customers so they can see when we're going to be increasing or decreasing the surcharge. We have not lost any business because of it. but then we deal with a lot of quite small companies.

"It's not the high fuel prices themselves that arc the problem, it's the volatility and uncertainty," he says. "It's not as if we'd be any better off with lower fuel prices, but our customers would be and that might mean they would be able to give us more work."

David points out that because most goods in the UK are delivered by truck, high fuel prices affect the cost of the goods in the shops: "It's just making the cost of everything unnecessarily high. It also makes the probability of foreign operators doing cabotage more likely." Because it concentrates on regional distribution, S&S has not suffered from foreign competition French, German and Polish trucks regularly drop goods into its depot to be delivered either into the pallet network or direct to customers. The two main foreign companies it has relationships with are Norbert Dentressangle and Transalliance.

There are disadvantages to being based in the South-East. Property is expensive which is why few operators choose to open a depot in Kent. House prices are high and there is very little industry.

But there are a lot of people who live in the region and as David says, they all want goods: "That provides an opportunity for us. A lot of hauliers are looking to save money and link into us as ND and Transalliance do, and we are in discussions with a big operator to do about 100 pallets a night on its behalf."

To manage the growing number of pallets it is handling S&S uses the same Vigo IT system as Palletline.

"We use it to track jobs, build loads and provide proof of delivery," David reports. "About 80% of our jobs for the following day come in between 10am and lpm and we have a planner who builds the loads. Because we use the same system as Palletline, all the goods that come down overnight are automatically loaded onto the system."

One of the keys to staying profitable in tough economic times is make the best use of your assets, and this is something that S&S takes seriously. David explains that the company is hoping to use its artics more for regional distribution, for sound economic reasons: "Rather than contributing £25 to the bottom line doing a long trunk, they can make £100 doing regional work."

Ball adds: "We also have a fleet of rigids that are sat in the yards between 6.30pm and 4am, so I'm considering if there is a way we can use them to do night deliveries into London or to the coast for example."

S&S is also investigating the possibility of selling training to other hauliers, particularly in light of the Driver CPC. David says: "We want to do the Driver CPC training in house. We are also considering becoming a training centre for external drivers."

Identifying a niche market is the best option, he believes: "There are not many owner-drivers about and even fewer small operators. but there is a place for specialised and regional operators.

"A contract worth Lim or £2m may not be that important to a big operator but it is very important for the smaller haulier," he points out.

Ball sums up the firm's plans by saying its main challenge is to attract the small to medium sized customers.

"When people find us they generally stick with us," he concludes.

"The smaller customers generally think of the big companies when they are looking for a transport company and do not realise the potential of smaller operators like us.We need to help them see our potential." •