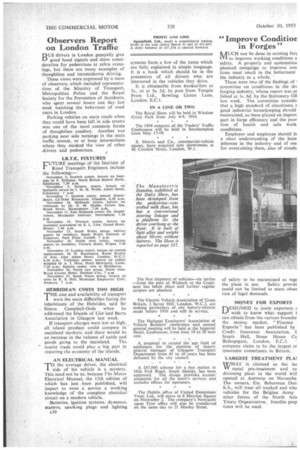 Page 32, 30th October 1953 — Observers Report on London Traffic
Close
Noticed an error?
If you've noticed an error in this article please click here to report it so we can fix it.

• ings, but there are many examples of thoughtless and inconsiderate driving. These views were expressed by a team of observers, which included representatives of the Ministry of Transport, Metropolitan Police and the Royal Society for the Prevention of Accidents, who spent. several hours One day last week watching the behaviour of road users in London.

Parking vehicles on main roads when they could have been left in side streets was one of the most common forms of thoughtless conduct. Another was parking near side turnings in the main traffic, stream, or at busy intersections where they masked the view of other drivers and pedestrians. . .