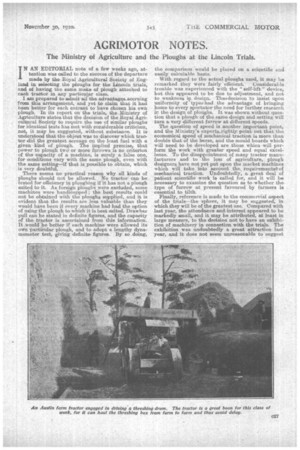 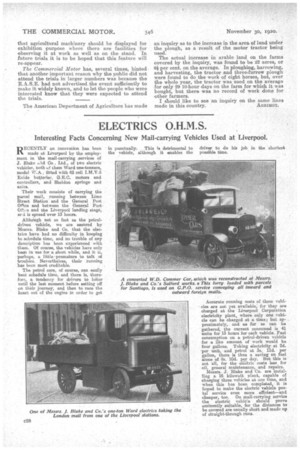 Page 21, 30th November 1920 — AGRIMOTOR NOTES.
Close
Noticed an error?
If you've noticed an error in this article please click here to report it so we can fix it.

The Ministry of Agriculture and the Ploughs at the Lincoln Trials.

IN AN EDITORIAL note of a few weeks ago, attention was called to the success of the departure made by the Royal Agricultural Society of England in selecting the ploughs for the Lincoln trials, and of having the same make of plough attached to each tractor in any particular class.

I am prepared to admit all-the advantages. accruing from this arrangement, and yet to claim that it had been better for each entrant to have chosen his own plough. In its report on the trials, the-Ministry of Agriculture states that the decision of the Royal Agricultural Society to require the use of similar ploughs for identical tests has met with considerable criticism, not, it may be suggested, .without substance. It is understood that the object was to discover which tractor did the greatest acreage on the least fuel with a given kind of plough. The implied premise, that power to plough twO or more furrows is no criterion of the capacity of a machine, is surely a false one, for conditions vary with the same plough, even with the same setting—if that is possible to obtain, which is very doubtful.

There seems no practical reason why all kinds of Ploughs should not be allowed. No tractor can be. tested for efficiency in ploughing if it has not a plough suited to it. As foreign ploughs were excluded, some machines were handicappekl ; the best results could not be obtained with the ploughs supplied, and it is evident that the results are less valuable than they would have been if every machine had had the option of uSing the plough to which it is best suited. Drawbar pull can be stated in definite figures, and the capacity of the tractor is ascertained from this information. It would be better if each machine were allowed its own particular plough, and to adopt a lengthy dynamometer test, giving definite figures. By. so doing,

the comparison would be placed on a scientific and easily calcula,hle basis. . With regard to the actual ploughs used it may be remarked they were fairly eftleient. Considerable trouble was experienced with the " device, but this appeared to be due to adjustment, and not to weakness in design. The4decision to insist upon

uniformity of type the advantage, of bringing home to every spectator the need for further research in the design of ploughs. It was shown without question that a plough of the same design and setting will turn a very different furrow at different speeds.

The question of speed is another important point, and the Ministry's oxpertsnightly point out that the economical speed of mechanical traction is more than double that of the horse, and the mould boards which will need to be developed are those when will perform the work with greater speed and equal excellence. To the disappointment of many tractor manufacturers and to the loss of agriculture, plough designers have not yet put upon the market machines which will take into account the. requirementst of mechanical traction. Undoubtedly, a great deal of patient scientific work is called for, and it will be necessary to examine the question as to whether the type of furrow at present favoured by farmers is essential to tilth.

Finally, reference is made to the commercial aspect of the trials—the sphere, it may be suggested, in which they will be of the greatest use.Compared with last year, the attendance ancliinterest appeared to be markedly small, and it may be attributed, at least in large measure, to the. decision not to have an eithibition of machinery in connection with the trials. The exhibition was undoubtedly a great attraction last year, and it does not seem unreasonable to suggest

that agricultural machinery should be displayed for exhibition purpose where there are facilities for observing it at work as well as on the stand. In future trials it is to be hoped that this feature will re-appear.

The Commercial Motor has, several times, hinted that another important reason why the public did not attend the trials in larger numbers was because the R.A.S.E. had not advertised the event sufficiently to make it widely known, and to let the people who were interested know that they were expected to attend the trials.

The American Department of Agriculture has made

an inquiry as to the increase in the area of land under the plough, as a result of the motor tractor being used.

The actual increase in arable land on the farms covered by the inquiry, was found to be 22 acres, or 6i per cent. on the average. In ploughing, harrowing, and harvesting, the tractor and three-furrow plough were found to do the work of eight horses, but, over the whole year, the tractor was used on the average for only 29 10-hour days on the farm for which it was bought, but there was no record of work done for other farmers.

I should like to see an inquiry on the same lines made in this country. AGRIMOT.