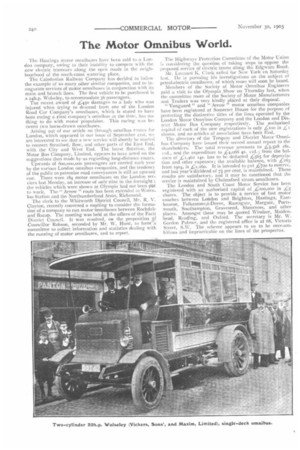 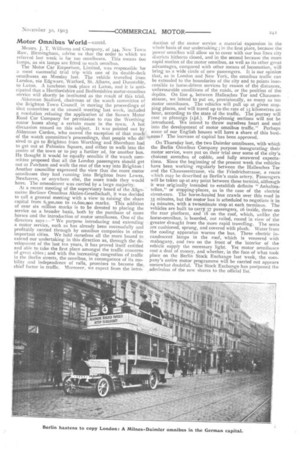 Page 4, 30th November 1905 — The Motor Omnibus World.
Close
Noticed an error?
If you've noticed an error in this article please click here to report it so we can fix it.
Keywords : London General Omnibus Company, National Bus Company

The Hastings motor omnibuses have been sold to a Lon. don company, owing to their inability to compete with the new electric tramcars along the open roads in the neighbourhocal of the south-coast watering place. The Caledonian Railway Company has decided to follow the example of so many. other similar companies, and to inaugurate services of motor omnibuses in conjunction with its main and branch lines: The first vehicle to be purchased is a 24h.p. Wolseley, to accommodate 36 passengers.

The recent award of ,45o damages to a lady who was injured when trying to descend from one of the London Road Car Company's omnibuses, which is stated to have been racing a rival company's omnibus at the time, has nothing to do with motor propulsion. This racing was between two horse-drawn omnibuses.

Arising out of our article on through omnibus routes for London, which appeared in our issue of September 2 1St, we are interested to see that a new service will shortly be started to connect Stratford, Bow, and other parts of the East End, with the City and West End. The latest flotation, the Motor Bus Company, Limited, appears to have acted on the suggestions then made by us regarding long-distance routes.

Upwards of 600,000,000 passengers are carried each year by the various London omnibus companies, and the tendency of the public to patronise road conveyances is still an upward one. There were 184 motor omnibuses on the London services last Monday, an increase of only-nine in the fortnight : the vehicles which were shown at Olympia had not been pat to work. The " Arrow " route has been extended to -Waterloo Station and the Northumberland Arms, Richmond.

The clerk to the Whitworth District Council, Mr. R. V. Clayton, recently convened a meeting to consider the formation of a company to run motor omnibuses between Rochdale and Bacup. The meeting was held at the offices of the Facit District Council. It was resolved, Oa the proposition 9f Councillor Robson, seconded by Mr. W. Hunt, to form a committee to collect information and statistics dealing with the running of motor omnibuses, and to report. The Highways Protection Committee of the Motor Union k considering the question of taking steps to oppose the proposed service of electric trams along the Edgware Road. Mr. Leonard K, Clark sailed for New York en Saturday last. Ile is pursuing his investigations on the subject of petrol-electric omnibuses, of which more will soon be heard.

Members of the Society of Motor Omnibus Engineers paid a visit to the Olympia Show on Thursday last, when the committee room of the Society of Motor Manufacturers and Traders was very kindly placed at their disposal. " Vanguard " and " Arrow" motor omnibus companies have been registered at Somerset House for the purpose of protecting the distinctive titles of the lines operated by the London Motor Omnibus Company and the London and DisErica Motor Bus Company respectively. The authorised capital of each of the new registrations is only ,-too in1.:'t shares, and no articles of association have been filed.

The directors of the Torquay and District Motor "Omnibus Company have issued their second annual report to the shareholders. The total revenue amounts to 45,528 18s.

I id., and the expenditure to 44,066 45. ; from the balance of -L:1,462 145. has to be deducted L:565 for depreciation and other expenses ; the available balance, with '263 from 1904, is ZI,16o. It is intended to put 4;7oo to reserve, and last year's dividend of ai per cent, is maintained. These results are satisfactory, and it may be mentioned that the service is maintained by Chelmsford steam omnibuses.

The London and South Coast Motor Service has been registered with an authorised capital of .4'100,000 in

shares. The object is to provide a service of fast motor 'coaches between London and Brighton, Hastings, Eastbourne, FolkestoneaaDover, Ramsgate, Margate, Portsmouth, Southampton, Gravesend, Sheerness, and other places. Amongst these may be quoted Windsor, Maidenhead, Reading, and Oxford. The secretary is Mr. W. Gordon Palmer, and the registered office is at 68, Victoria Street, S.W. The scheme appears to us to be over-ambitious and impracticable on the lines of the prospectus.

Messrs. J. T. Williams and Company, of 344, New Town Row, Birmingham, advise us that the order to which we referred last week is for loo omnibuses. This means 600 Limps, as six lamps are fitted to each omnibus. The Motor Car Emporium, Limited, was responsible for a most successful trial trip with one of its double-deck omnibuses on Monday last. The vehicle travelled from London, via Edgware, Watford, St. Albans, and Dunstable, to Luton. A luncheon took place at Luton, and it is anticipated that a Hertfordshire and Bedfordshire motor-omnibus service will shortly be instituted as the result of this trial. Alderman Stafford, chairman of the watch committee of the Brighton Town Council, in moving the proceedings ot that committee at the council meeting last week, included a resolution refusing the application of the Sussex Motor Road Car Company for permission to run the Worthing motor buses along a certain route in the town. A hot discussion ensued on this subject. It was pointed out by Alderman Carden, who moved the exception of that much of the watch committee's proceedings, that people who desired to go to Brighton from Worthing and Shoreham had to get out at Palmeira Square, and either to walk into the centre of the town or to pay a further 2d. for another bus. He thought it would be equally sensible if the watch committee proposed that all the London passengers should get out at Patcham and walk the rest of the way into Brighton ! Another councillor expressed the view that the more motor omnibuses they had running into Brighton from Lewes, Newhaven, or anywhere else, the more trade they would have. The amendment was carried by a large majority.

At a recent meeting of the supervisory board of the Allgemeine Berliner Omnibus Aktien-Gesellschaft, it was decided to call a general meeting with a view to raising the share capital from 6,300,000 to 72,600,000 marks. This addition of over six million marks is to be devoted to placing the service on a broader basis, both by the purchase of more horses and the introduction of motor omnibuses. One of the directors says :—" We purpose introducing and extending a motor service, such as has already been successfully and profitably carried through by omnibus companies in other important cities. We hold ourselves all the more bound to extend our undertaking in this direction as, through the development of the last ten years, it has proved itself entitled and able to take the first place amongst the traffic concerns of great cities ; and with the increasing congestion of .traffic in the Berlin streets, the omnibus, in consequence of its mobilityand independence of rails, promises to become the chief factor in traffic. Moreover, we expect from the intro duction of the motor service a material expansion in the whole basis of our undertaking ; in the first place, because the power omnibus will allow us to cover with our bus lines city districts hitherto closed, and in the second because the more rapid motion of the motor omnibus, as well as its other great advantages, compared with other means of locomotion, will bring us a wide circle of new passengers. It is our opinion that, as in London and New York, the omnibus traffic can be extended to the boundaries of the city and to points inaccessible to horse-driven services by reason of the distances, unfavourable conditions of the roads, or the position of the dephts. On line 4, between Hallesches Tor and Chausseestrasse, we intend to put on, provisionally, as many as ten motor omnibuses. The vehicles will pull up at given stopping places, and will travel up to the rate of 75 kilometres an hour, according to the state of the traffic. The journey will

cost 7o pfennigs Five-pfennig sections will not be introduced. We intend to throw ourselves heart and soul; into the development of motor omnibus traffic." Perhapssome of our English houses will have a share of this business? The increase of capital has been approved.

On Thursday last, the two Daimler omnibuses, with which the Berlin Omnibus Company purpose inaugurating their motor service, were put on their trial over some of the city's choicest stretches of cobble, and fully answered expectations. Since the beginning of the present week the vehicles have been working regularly between the Hallesches Tor and the Chausseestrasse, via the Friedrichstrasse, a route which may be described as Berlin's main artery. Passengers will be taken up at any point between these termini, although it was originally intended to establish definite " Anhaltestellen," or stopping-places, as in the case of the electric street-cars. The horse-hauled bus crawls over this road in 35 minutes, but the motor bus is scheduled to negotiate it in 24 minutes, with a two-minute stop at each terminus. The vehicles are built to carry 37 passengers, 16 inside, three on the rear platform, and 78 on the roof, which, unlike the horse-omnibus, is boarded, not railed, round in view of the greater draught from the more rapid travelling. The seats are cushioned, sprung, and covered with plush. Water from the cooling apparatus warms the bus. Three electric incandescent lamps in the roof, which is veneered with mahogany, and two on the front of the interior of the vehicle supply the necessary light. Yet motor omnibuses cost a deal of money, and whether, in the face of what took place on the Berlin Stock Exchange last week, the company's entire motor programme will be carried out appears somewhat doubtful. The Stock Exchange has postponed the admission of the new shares to the official list.