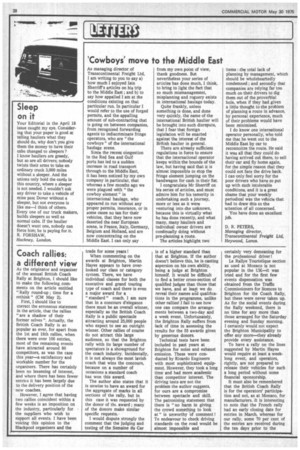 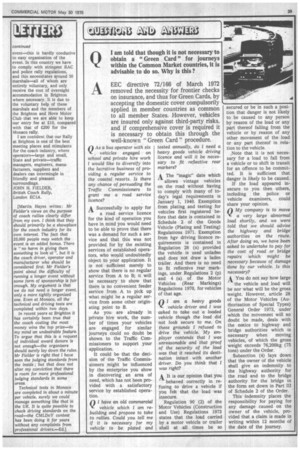 Page 48, 30th May 1975 — Coach rallies: a different view
Close
Noticed an error?
If you've noticed an error in this article please click here to report it so we can fix it.
Keywords : Auto Racing, Rallying, Motorsport, Sports, Colin Mcrae

As the originator and organiser of the annual British Coach Rally at Brighton, I should like to make the following comments on the article entitled " Rally round-up ; time for a rethink" (CM May 2).

First, I should like to correct the erroneous statement in the article, that the rallies "are a shadow of their former selves ". Actually, the British Coach Rally is as popular as ever, for apart from the 1st and 18th rallies, when there were over 100 entries, most of the remaining events have attracted around 80 competitors, as was the case this year—a satisfactory and workable number for the organisers. There has certainly been no lessening of interest, and where there has been fewer entrics it has been largely due to the delivery position of the new coaches.

However, I agree that having two rallies coincident within a few weeks is an imposition on the industry, particularly for the suppliers who wish to support all events. I have been voicing this opinion to the Blackpool organisers and the

trade for some years !

When commenting on the awards at Brighton, Martin Hayes appears to have overlooked our class or category system. There, we have individual classes for both the executive and grand touring type of coach and there is even a major award for a " standard" coach. I am sure that in a concours d'elegance there must be an overall winner, especially as the British Coach Rally is a public spectacle attracting around 25,000 people who expect to see an outright winner. Other rallies of course do not attract this large audience, so that the Brighton rally with its large number of spectators is a showground for the coach industry. Incidentally, it is not always the most lavish coach that wins the concours, because on a number of occasions a standard coach has won this award.

The author also states that it is unwise to have an award for the aggregate of marks in all sections of the rally, but in this case it was requested by the donor of thc award ; many of the donors make similar specific requests.

is of a higher standard than that at Brighton. If the author doesn't believe this, he is casting aspersion on his own ability, being a judge at Brighton himself. It would be difficult to find a better cross-section of qualified judges than those that we have, and at least we do reveal their names and qualifications in the programme, unlike other rallies! I fail to see how one can compare the arrangements between a two-day and a week event. Unfortunately, the Brighton Rally suffers from lack of time in assessing the results for the 55 awards given by generous donors.

Technical tests have been included in past years at Brighton for noise and exhaust emission. These were conducted by Ricardo Engineers with most sophisticated equipment. However, they took a long time and had more academic than competitor interest. The driving tests are not the

problem the author suggests, for ours are a compromise between spectacle and skill. The patronising statement that there is "no harm in giving the crowd something to look at" is unworthy of comment ! To endeavour to check driving standards on the road would be almost impossible and

Le Rallye Touristique section as used at Monaco Ls not popular in the UK—it was tried and for the first few events dispensation was obtained from the Traffic Commissioners for licences to Brighton for the Coach Rally, but these were never taken up. As for the social events during the Rally weekend, there is no time for any more than those arranged for the Saturday evening and Sunday morning. I certainly would not expect the Brighton Municipality to offer any more—they already provide every assistance.

To have a rally on the lines suggested by Martin Hayes would require at least a weeklong event, and operators, rightly, are not prepared to release their vehicles for such a long period without some financial sponsorship.

It must also be remembered that the British Coach Rally is for the operators' participation and not, as at Monaco, for manufacturers. It is interesting to note that the French rally had an early closing date for entries in March, whereas for our rally, some 70 per cent of the entries are received during the ten days prior to the event—this is hardly conducive to easy organisation of the event. In this country we have to comply with stringent RAC and police rally regulations, and this necessitates around 50 marshals—all of whom are entirely voluntary, and only receive the cost Of overnight accommodation in Brighton where necessary. It is due to the voluntary help of these marshals and the members of the Brighton and Hove Motor Club that we are able to keep our entry fee at £10, compared with that of £200 for the Monaco rally.

I am confident that our Rally at Brighton is one of the best meeting places and stimulants for the coach industry, where operators—large and small, State and private—traffic managers, engineers, manufacturers, suppliers and dealers can intermingle in friendly and pleasant surroundings.

[Martin Hayes writes: Mr Fielder's views on the purpose of coach rallies clearly differ from my own. I think that they should primarily be a showplace for the coach industry for its own interest. The fact that 25,000 people may watch the event is an added bonus, There is 'no harm in giving them something to look at ", but it is the coach driver, operator and manufacturer who should be considered first. Mr Fielder's point about the difficulty of running a longer event without some form of sponsorship is fair enough. My argument is that we do not need a longer event, only a more tightly organised one. Even at Monaco, all the technical and driving tests are completed within two days.

In recent years at Brighton it has certainly been true that the coach costing the most money wins the top prize—to my mind an undesirable feature. To argue that this is a request of individual award donors is not enough—the organisers should surely lay down the rules. Mr Fielder is right that I have seen the judging standards from the inside but that does not alter my conviction that there is room for more professional judging standards in some areas.

Technical tests in Monaco are completed in about a minute per vehicle, surely we could manage something like that in the UK. It is quite possible to check driving standards on the road—the CMLDoY contest has been doing it for years without any complaints from professional drivers.—Ed.]