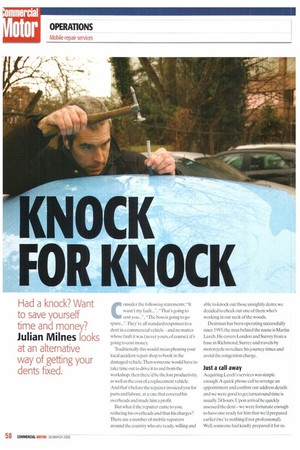 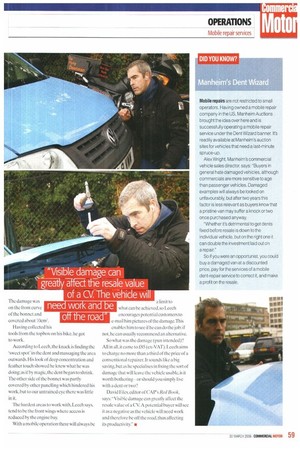 Page 58, 30th March 2006 — OCK FOR KNOCK
Close
Noticed an error?
If you've noticed an error in this article please click here to report it so we can fix it.
Keywords : Leech

Had a knock? Want to save yourself time and money? Julian Milnes looks at an alternative way of getting your dents fixed.

Consider the following statements: -It wasn't my fault...", "That's going to cost you...". -The boss is going to go spare...". They're all standard responses to a dent in a commercial vehicle and no matter whose fault it was (never yours, of course), it's going to cost money.

Traditionally this would mean phoning your local accident repair shop to hook in the damaged vehicle.Then someone would have to take time out to drive it to and from the workshop; then there'd be the lost productivity, as well as the cost of a replacement vehicle. And that's before the repairer invoiced you for parts and labour, at a rate that covered his overheads and made him a profit.

But what if the repairer came to you, reducing his overheads and thus his charges? There are a number of mobile repairers around the country who are ready, willing and able to knock out those unsightly dents; we decided to check out one of them who's working in our neck of the woods.

Dentman has been operating successfully since 1993; the man behind the name is Martin Leech. He covers London and Surrey from a base in Richmond, Surrey and travels by motorcycle to reduce his journey times and avoid the congestion charge.

Just a call away

Acquiring Leech's services was simple enough.A quick phone call to arrange an appointment and confirm our address details and we were good to go; turnaround time is usually 24 hours. Upon arrival he quickly assessed the dent -we were fortunate enough to have one ready for him that we'd prepared earlier (we're nothing if not professional). Well, someone had kindly prepared it for us. The damage was on the front curve of the bonnet and covered about .10cm2.

Having collected his tools from the topbox on his bike, he got to work.

According to Leech, the knack is finding the 'sweet spot' in the dent and massaging the area outwards. His look of deep concentration and feather touch showed he knew what he was doing; as if by magic, the dent began to shrink. The other side of the bonnet was partly covered by other panelling which hindered his work, but to our untrained eye there was little in it.

The hardest areas to work with. Leech says, tend to be the front wings where access is reduced by the engine hay.

With a mobile operation there will always be a limit to what can be. achieved, so Leech encourages potential customers to e-mail him pictures of the damage.This enables him to see if he can do the job; if not, he can usually recommend an alternative.

So what was the damage (pun intended)? All in all, it came to 05 (ex-VAT). I .eech aims to charge no more than a third of the price of a conventional repairer. It sounds like a big saving, but as he specialises in fixing the sort of damage that will leave the vehicle usable, is it worth bothering — or should you simply live with a dent or two?

David Files, editor of CAP's Red Book, says: "Visible damage can greatly affect the resale value of a CV. A potential buyer will see it as a negative as the vehicle will need work and therefore be off the road, thus affecting its productivity." •