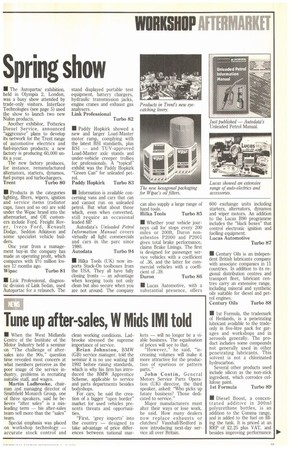 • When the West Midlands Centre of the Institute of the Motor Industry held a seminar on "The challenge of aftersales into the 90s," question time revealed most concern at what members perceive as the poor image of the service industry, problems in recruiting suitable staff, and wages.

Martin Ladbrooke, chairman and managing director of Smithfield Monarch Group, one of three speakers, said he believes "after sales" is a misleading term — his after-sales team sell more than the "sales" team.

Brian Johnston, BMW (GB) service manager, told the seminar it is no use waiting till 1992 before raising standards, which is why his firm has introduced the BMW Apprentice Scheme, applicable to service and parts departments besides bodyshops.

For cars, he said the creation of a bigger "open border" market for used vehicles presents threats and opportunities.

"First, 'grey imports' into the country — designed to take advantage of price differences between national mar

kets — will no longer be a viable business. The equalisation of prices will see to that.

"However," he said, "increasing volumes will make it more attractive for the production of spurious or pattern parts."

Major manufacturers must alter their ways or lose work, he said. How many dealers now replace exhausts or clutches? Vauxhall/Bedford is now introducing next-day service all over Britain.