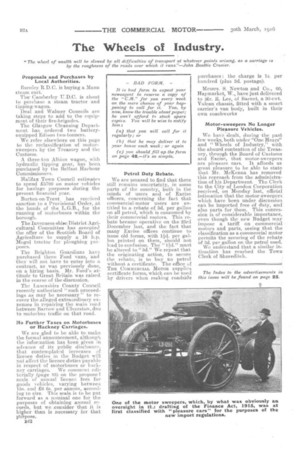 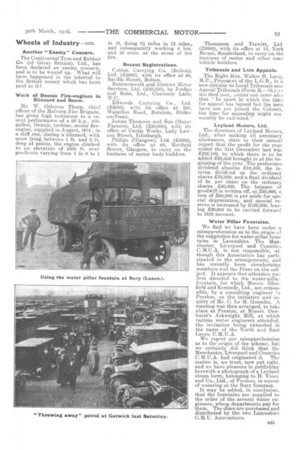 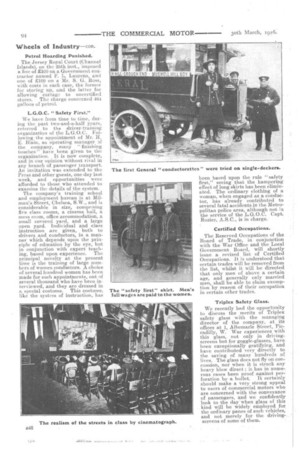 Page 12, 30th March 1916 — The Wheels of Industry.
Close
Noticed an error?
If you've noticed an error in this article please click here to report it so we can fix it.
Keywords : Leyland Motors, British Leyland, Steam Wagon, Albion Motors, Rebate

"The wheel of wealth will be slowed by all difficulties of transport at whatever points arising, as a carriage is by the roughness of the roads over which it runs.''--John Beattie Crozier.

The Camberley IT.D.C. is about to purchase a steam tractor and tipping-wagon.

Deal and Walmer Councils are taking steps to add to the equipment of their fire-brigades.

We refer elsewhere on this page to the reclassification of motorsweepers by the Treasury and the Customs.

A three-ton Albion wagon, with hAraulic tipping gear, has been purchased by the Belfast Harbour Commission ers.

Burton-on-Trent has received sanction to a Provisional Order, at the hands of the L.G.B., for the running of motorbuses within the borough.

The Inverness-shine District Agricultural Committee has accepted the offer of the Scottish Board of Agriculture to supply a 16 h.p. Mogul tractor for ploughing purposes.

The Brighton Guardians have purchased three Ford vans, and they will not have to enter into a • contract, as was previously done, on a hiring basis. Mr. Ford's attitude to Great Britain was raised in the course of the discussion. The Lancashire County Council recently authorized "such proceedings as may be necessary" to recover the alleged extraordinary expenses in repairing the main road between Barrow and Myer-stop, due to T./iambus traffic on that road.

No Further Taxes on Motorbuses or Hackney Carriages.

We are glad to be able to make the formal announcement, althouglr the information has been given in advance of its public disclosure. that contemplated increases cif licence duties in the Budget will not affect the licence duties payable in respect of motorbuses or hackney carriages. We comment editorially (page 83) on the propose l scale of annual licence fees for goods vehicles, varying betweea 15s. and £6 Gs. -per annum, according -to size. This scale is to be put forward as a nominal one for the purposes of obtaining annual . ic

cords, but we ,consider that it is higher than is necessary for that purpose.

We are amazed to find that there still remains uncertainty, in some parts of the country, both in the minds of users and of Excise officers, concerning the fact that commercial-motor users are entitled to a rebate of 3d. per gallon on all petrol, which is consumed by their commercial motors. This rebate became operative on the 23rd December last, and the fact that many Excise Offices continue to issue old forms, with 1,c1. per gallon printed on them, should not lead to confusion. The "lid." must he altered to "3d." We repeat. that the originating action, to secure the rebate, is to buy no petrol without a certificate. The office c,f THE COMMERCIAL MOTOR supplies certificate forms, which can be used by drivers when making roadside purchases : the charge is Is. per hundred (plus 3d. postage).

Messrs. S. Newton and Co., 60, Haymarket, W., have just delivered to Mr. It. Lee, of Barnet, a 30-cwt. Vulcan chassis, fitted with a smart carrier's van body, built in their own coachworks Motor-sweepers No Longer Pleasure Vehicles.

We have dealt, during the past few weeks, both under One Hears" and " Wheels of Industry," with the absurd contention of the Treasury, through the Board of Customs and Excise, that motor-sweepers are pleasure cars. It affords us great plea-sure to be able to state that Mr. McKenna has removed this reproach from the administration of his Department. The Clerk to the City of London Corporation received, on Monday last, official intimation that the motor-sweepers which have been under discussion can be imported free of duty, and also parts for them. This concession is of considerable importance, even though the new Budget may impose a tariff on commercial motors and parts, seeing that the classification as a commercial motor permits the securing of the rebate of ad. per gallon on the petrol used. We understand that a similar intimation has reached the Town Clerk of Shoreditch. Another "Enemy" Concern.

The Continental Tyre and Rubber Co. (of Great Britain), Ltd., has been declared an enemy concern, and is to be wound up. What will have happened in the interval to the British money which has been paid to it?

Work of Dennis Fire-engines in Blizzard and Snow.

Mr. W. Osborne Thorp, chief officer of the Malvern Fire Brigade, has given high testimony to a recent performance of a. 60 h.p., 400gallon, Dennis, turbine, motor fireengine, supplied in August. 1912; in a stiff run, during a blizzard, with snow lying between 1. ft. and 2 ft. deep at points, the engine climbed to an elevation of 1000 ft. over gradients varying from 1 in 6 to 1 in 10, doing 3i miles in 13 mins., and subsequently working 4 hrs. and 10 mins, at the scene of the tire.

The Right Hon. Walter H. Long, M.P., President of the L.G.B., in a new circular to Local Tribunals ana Appeal Tribunals (Form 11-70.) e,t the 23rd inst., joints out inter ahre that In cases in which the time for appeal has lapsed but the men have not yet joined the Colours, the time for appealing might reasonably be extended.'

The directors of Leyland Motors, Ltd., after making all necessary allowances, state in their annual report that the profit for the year ended the 31st December last was 2252,106, to which there is to be added 228,552 brought in at the beginning of the year. The preference dividend absorbs 210,400, the interim dividend on the ordinary shares 210,000, and a final dividend of 2s. per share on the ordinary shares 220,000. The balance of goodwill is written off, at 263,000, a sum of 250,000 is put aside for special depreciation and spacial re

We find we have been under a misapprehension as to the origin of the suggestion for water-pillar fountains in Lancashire. The Manchester, Liverpool and Countie3 C.M.U.A. is not responsible, although this Association has participated in the arrangements, and has recently been circularizing members and the Press on the subject. It. appears that attention wai first, directed to the water-pillar fountain, for which Messrs. Glenfield and Kennedy, Ltd., are responsible, by a consulting engineer in Preston, on the initiative and inquiry of Mr. C. Le M. Gosselin. A meeting was then arranged, to take place at Preston, at Messrs. Dewburst's Arkwright. Mill, at which various water engineers attended, the invitation being extended in the name of the North and East Lanes. A.

We regret our misapprehension as to the origin of the scheme, but we certainly did think that the Manchester, Liverpool and Counties C.M.U.A, had originated it. The matter is, we trust, now put right, and we have pleasure in Publishing herewith a photograph of a Leyland steam lorry, belonging to H. Viney and Co., Ltd., of Preston, in course of watering at the Bury fountain. It may be added, in conclusion, that the fountains are supplied to the order of the several water engineers who sp departments pay for them. 'The discs are purchased and distributed by the two Lancashire Associations. Petrol Hoarding Punished.

The Jersey Royal Court (Channel Islands), on the 25th inst., imposed a fine of 2100 on a Government contractor named F. L Laurens, and one of 2100 on a Mr. S. G. Ross, with costs in each case the former for storing up, and the latter for allowing cartage to uncertified stores. The charge concerned 464 gallons of petrol.

We have from time to time, during the past two-and-a-half years, referred to the driver-training organization of the L.G.O.C. Following the appointment of Mr. H. K Blain, as operating manager of the company, many " finishing touches" have been given to the organization. . It is now complete, and in our opinion without rival in any branch of passenger transport. An invitation was extended to the Press and other guests, one day last week, and opportunities were afforded to those who attended to examine the details of the system. The company's training school and employment bureau. is at Milman's Street, Chelsea, S.W., and is considerable in size, comprising five class rooms, a cinema hall, a mess room, office accommodation, a small covered yard, and a large open yard. Individual and class instruction are given, both to drivers and conductors, in a manner which depends upon the principle of education by the eye, but in conjunction with expert teaching, based upon experience. The principal novelty at the present time is the training of large numbers of women conductors. A choice of several hundred women has been made for such appointments, out of several thousand who have been interviewed, and they arc dressed in a special costume. This costume, like the system of instruction, has been based upon the rule "safety first," seeing that the hampering effect of long skirts has been eliminated. The ordinary clothing of a woman, when engaged as a conductor, has already contributed to several fatal accidents in the Metropolitan police area, although not in the service of the L.G.O.C. Capt. Rozier, A.S.C., is in charge.

The Reserved Occupations of the Board of Trade, in conjunction with the War Office and the Local Government Board, will shortly issue a revised list of Certified Occupations. It is understood that certain trades will be removed from the list, whilst it will be directed that only men of above a certain age, and generally only married men, shall be able to claim exemption by reason of their occupation in certain other trades.

We recently had the opportunity to discuss the merits of Triplex safety glass with the managing director of the company, at its offices.at 1, Albemarle Street, Piccadilly, W. War experiences with this glass, not only in drivingscreens but for goggle-glasses, have been exceptionally gratifying, and have contributed very directly to the saving of many hundreds of lives. The glass does not fly on concussion, nor when it is struck any heavy blow direct ; it has in mime-. rous cases been proof against perforation by a bullet. It certainly should make a very strong appeal to users of commercial motors who are concerned with the conveyance of passengers, and we confidently look to the day when glass of this kind will be widely employed fort the ordinary panes of such vehicles, and not merely for the driving screens of some of them.