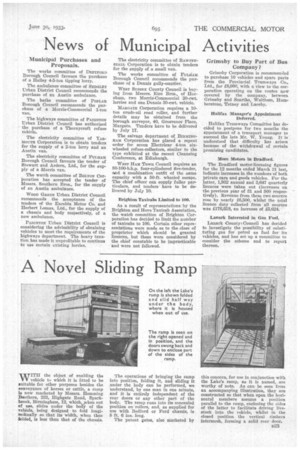 The works committee of DEPTFORD Borough Council favours the purchase of a Halley 4-5-ton tipping lorry.

The ambulance committee of SEDGLEE Urban District Council recommends the purchase of an Austin ambulance.

The baths committee of POPLAR Borough Council recommends the purchase of a Morris-Commercial 1-ten van.

The highways committee of PAIGNTON Urban District Council has authorized ' the purchase of a Thornycroft refuse vehicle.

The electricity committee of LitMOUTH Corporation is to obtain tenders for the supply of a 2-ton lorry and an Austin van.

The electricity committee of FULHAM Borough Council favours the tender of Stewart and Ardern, Ltd., for the supply of a ■Morris van.

The watch committee of BOLTON Corporation has accepted the tender of Messrs. Southern Bros., for the supply of an Austin ambulance.

Wows GREEN Urban District Council recommends the acceptance of the tenders of the Excelda Motor Co. and Herbert Lomas, Ltd., for the supply of a chassis and body respectively, of a new ambulance.

PAIGNTON Urban District Council is considering the advisability of obtaining vehicles to meet the requirements of the highways department. The heavy taxation has made it unprofitable to continua to use certain existing lorries. The electricity committee of RAMITENSTALL Corporation is to obtain tenders for the supply of a small van.

The works committee of Fumfast Borough Council recommends the purchase of a Dennis gully-emptier.

MARGATE Corporation requires a 10ton crude-oil road roller, and further details may be obtained from the borough surveyor, 40, Grosvenor Place, Margate. Tenders have to be delivered by July 17.

The salvage department of BIRMINGHAM Corporation has placed a repeat order for seven Electricar 4-ton sixwheeled refuse-collectors, similar to the type exhibited at the recent Cleansing Conference, at Edinburgh.

"WEST HAM Town Council requires an 80-100-b.h.p. four-cylindered fire-tender, and a combination outfit of the same capacity with a 50-ft. wheeled escape. The chief officer can supply fuller particulars, and tenders have to be delivered by July 10.

As a result of representations by the Brighton and Hove Taxicab Association, the watch committee of Brighton Corporation has decided to limit the number of taxicabs to 100. Certain other repre• sentations were made as to the class of proprietor which should be granted licences, but these were considered by the chief constable to be impracticable and were not followed.

Grimsby Corporation is recninmeuded to purchase 10 vehicles and spare parts from the Provincial Tramways Co., Ltd., for £8,000, with a view to the corporation operating on the routes now covered by the company, between Grimsby and Scartho, Waltham, Humbentone, Tetney and Laceby.

Halifax Tramways Committee has decided to postpone for two months the appointment of a transport manager to succeed the late Mr. W. Young. It is understood that difficulty has arisen because of the withdrawal of certain Promising candidates.

The Bradford motor-licensing figures for the 12 months ended March 31 last, indicate increases in the numbers of both private ears and goods vehicles. For the latter, 1,932 annual and 3,647 quarterly licences were taken out (increases on the previous year of 31 and 560 respectively). Revenue from these two sources rose by nearly £6,500, whilst the total licence duty collected from all sources was £176,618, an increase of £5,624.

Lanark County Council has decided to investigate the possibility of substituting gas for petrol as fuel for its vehicles, and has set up a committee to consider the scheme and to report thereon.