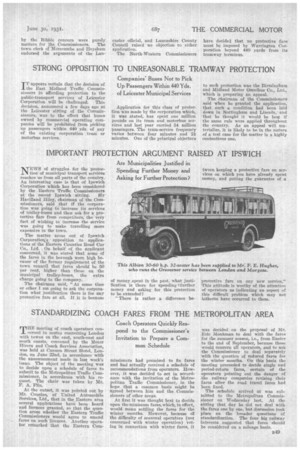 Page 67, 30th June 1931 — IMPORTANT PROTECTION ARGUMENT RAISED AT IPSWICH
Close
Noticed an error?
If you've noticed an error in this article please click here to report it so we can fix it.
Keywords : Business / Finance

Are Municipalities Justified in Spending Further Money and Asking for Further Protection?

NEWS of struggles for the protection of municipal transport services reaches us from all parts of the country. An interesting case is that of Ipswich Corporation which has been considered by the Eastern Traffic Commissioners at the recent Ipswich sitting. Sir Havilland Hiley, chairman of the Commissioners, said that if the corporation was going to increase its services of trolley-buses and then ask for a protective fare from competitors, the very fact of wishing to increase the service was going to make travelling more expensive in the town.

The matter arose out of Ipswich Corporation's opposition to applications of the Eastern Counties Road Car Co., 141. On behalf of the Applicant concerned, it was stated that some of the fares in the borough were high because of the former requirement of the :town council that fares should be 50 per cent, higher than those on the municipal trolley-buses, the extra charge going to the company.

The chairman said, "At some time or other I am going to ask the corporation what justification there is for any protective fare at all. If it is because of money spent in the past, what justification is there for spending '3further money and asking for this protection to be extended?

"There is rather a difference be

tweert keeping a protective fare on services on which you have already spent money, and getting the guarantee of a

protective fare on any new service." This attitude is worthy of the attention of operators as indicating an aspect of this difficult problem which may not hitherto have occurred to them.