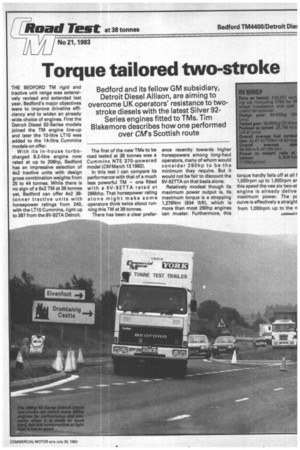 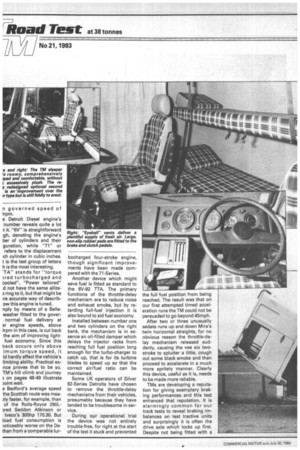 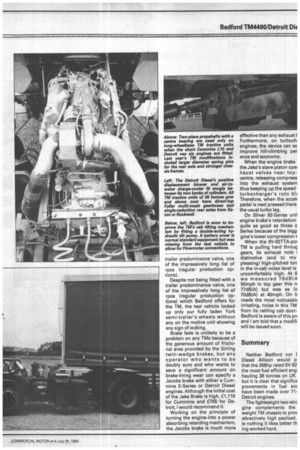 THE BEDFORD TM rigid and tractive unit range was extensively revised and extended last year. Bedford's major objectives were to improve driveline efficiency and to widen an already wide choice of engines. First the Detroit Diesel 92-Series models joined the TM engine line-up and later the 10-litre LT10 was added to the 14-litre Cummins models on offer.

With its in-house turbocharged 8.2-litre engine now rated at up to 208hp, Bedford has an impressive selection of 4x2 tractive units with design gross combination weights from 25 to 44 tonnes. While there is no sign of a 6x2 TM at 38 tonnes yet, Bedford can offer 4x2 38tanner tractive units with horsepower ratings from 240, with the LT10 Cummins, right up to 387 from the 8V-92TA Detroit. The first of the new TMs to be road tested at 38 tonnes was a Cummins NTE 370-powered model (CM March 13 1982).

In this test I can compare its performance with that of a much less powerful TM — one fitted with a 6V-9 2TTA rated at 266bhp. That horsepower rating alone might make some operators think twice about running this TM at 38 tonnes.

There has been a clear prefer

ence recently towards higher horsepowers among long-haul operators, many of whom would consider 2 9 0 hp to be the minimum they require. But it would not be fair to discount the 6V-92TTA on that basis alone.

Relatively modest though its maximum power output is, its maximum torque is a strapping 1,276Nm (934 lbft), which is more than most 290hp engines can muster. Furthermore, this torque hardly falls off at all f 1,000rpm up to 1,600rpm ar this speed the vee six two-st engine is already delive maximum power. The pc curve is effectively a straight from 1,000rpm up to the n n governed speed of lrpm.

e Detroit Diesel engine's number reveals quite a lot it. "6V" is straightforward igh, denoting the engine's ber of cylinders and their guration, while "71" or refers to the displacement ch cylinder in cubic inches. t is the last group of letters h is the most interesting. -TA" stands for "torque )red turbocharged and cooled". "Power tailored" d not have the same allite3 ring to it, but that might be ire accurate way of describow this engine is tuned. nply by means of a Bellewasher fitted to the governormal fuel delivery at ar engine speeds, above lrpm in this case, is cut back the aim of improving lightfuel economy. Since this back occurs only above imum torque speed, it Id hardly affect the vehicle's limbing ability. Practical exqice proves that to be so. TM's hill climb and journey a on pages 48-49 illustrate )oint well.

e Bedford's average speed the Scottish route was mealy faster, for example, than of the Rolls-Royce 290L?red Seddon Atkinson or Iveco's 300hp 170.30. But load fuel consumption is Ioticeably worse on the Dethan from a comparable tur bocharged four-stroke engine, though significant improvements have been made compared with the 71-Series.

Another device which might save fuel is fitted as standard to the 6V-92 TTA. The primary functions of the throttle-delay mechanism are to reduce noise and exhaust smoke, but by retarding full-fuel injection it is also bound to aid fuel economy.

Installed between number one and two cylinders on the right bank, the mechanism is in essence an oil-filled damper which delays the injector racks from reaching full fuel position long enough for the turbo-charger to catch up, that is for its turbine blades to speed up so that the correct air/fuel ratio can be maintained.

Some UK operators of Silver 92-Series Detroits have chosen to remove the throttle-delay mechanisms from their vehicles, presumably because they have tended to be troublesome in service.

During our operational trial the device was not entirely trouble-free, for right at the start of the test it stuck and prevented the full fuel position from being reached. The result was that on our first attempted timed acceleration runs the TM could not be persuaded to go beyond 45mph.

After two or three unusually sedate runs up and down Mira's twin horizontal straights, for no obvious reason the throttle-delay mechanism released suddenly, causing the vee six twostroke to splutter a little, cough out some black smoke and then proceed to accelerate in a much more spritely manner. Clearly this device, useful as it is, needs to be made more reliable.

TMs are developing a reputation for giving exemplary braking performances and this test enhanced that reputation. It is alarmingly common for our track tests to reveal braking imbalances on test tractive units and surprisingly it is often the drive axle which locks up first. Despite not being fitted with a trailer predominance valve, one of the impressively long list of rpos (regular production options).

Despite not being fitted with a trailer predominance valve, one of the impressively long list -of rpos (regular production options) which Bedford offers for the TM, the test vehicle locked up only our fully laden York semi-trailer's wheels without any on the motive unit showing any sign of locking.

Brake fade is unlikely to be a problem on any TMs because of the generous amount of frictional area provided by the Girling twin-wedge brakes, but any operator who wants to be doubly sure and who wants to save a significant amount on brake-lining wear con specify a Jacobs brake with either a Cummins E-Series or Detroit Diesel engines. Although the initial cost of the Jake Brake is high, £1,116 for Cummins and £765 for Detroit, I would recommend it.

Working on the principle of turning the engine into a power absorbing retarding mechanism, the Jacobs brake is much more effective than any exhaust I Furthermore, on turboch.

engines, the device can ac improve hill-climbing per ance and economy.

When the engine brake the Jake's slave piston Opel haust valves near top centre, releasing compress into the exhaust system thus keeping up the speed turbocharger's roto bli Therefore, when the accelt pedal is next pressed there the usual turbo lag.

On Silver 92-Series unit engine brake's retardation quite as good as those o Series because of the bigg. gine's lower compression r When the 6V-92TTA-poi TM is pulling hard throug gears, its exhaust note I distinctive (and to my pleasing) high-pitched ton in the in-cab noise level is uncomfortably high. At 6 we measured 7 6dB(A 50mph in top gear this rc 77dB(A) but was as lo 70dB(A) at 40mph. On b roads the most noticeabk irritating, noise in this TM from its rattling cab doorBedford is aware of this or( and I am told that a modifi, will be issued soon.

Neither Bedford nor Diesel Allison would pl that the 266hp rated 6V-92 the most fuel efficient eng. hauling 38 tonnes on UK but it is clear that significa provements in fuel ecc have been made over 71Detroit engines.