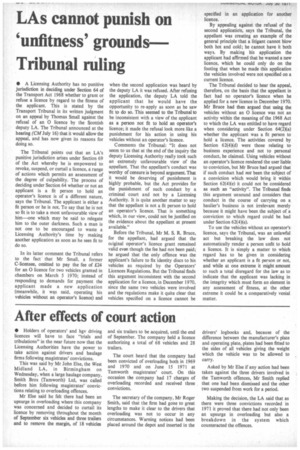 • A Licensing Authority has no punitive jurisdiction in deciding under Section 64 of the Transport Act 1968 whether to grant or refuse a licence by regard to the fitness of the applicant. This is stated by the Transport Tribunal in its written judgment on an appeal by Thomas Small against the refusal of an 0 licence by the Scottish deputy LA. The Tribunal announced at the hearing (CM July 16) that it would allow the appeal, and has now given its reasons for doing so.

The Tribunal points out that an LA's punitive jurisdiction arises under Section 69 of the Act whereby he is empowered to revoke, suspend, or curtail a licence, a range of actions which permits an assessment of the degree of culpability. The process of deciding under Section 64 whether or not an applicant is a fit person to hold an operator's licence is of a different nature. says the Tribunal. The applicant is either a fit person or he is not. To say that he i5 not SO fit is to take a most unfavourable view of him—one which may be said to relegate him to the outer darkness. Such a man is not one to be encouraged to waste a Licensing Authority's time by making another application as soon as he sees fit to do so.

In its latter comment the Tribunal refers to the fact ' that Mr Small, a former C-licensee, omitted to pay the fee of £24 for an 0 licence for two vehicles granted in chambers on March 5 1970; instead of responding to demands for payment the applicant made a new application (meanwhile. it was said, operating his vehicles without an operator's licence) and when the second application was heard by the deputy LA it was refused. After refusing the application, the deputy LA told the applicant that he would have the opportunity to re-apply as soon as he saw fit to do so. This seemed to the Tribunal to be inconsistent with a view of the applicant as a person not fit to hold an operator's licence; it made the refusal look more like a punishment for his action in using his vehicles without an operator's licence.

Comments the Tribunal: "It does not seem to us that at the end of the inquiry the deputy Licensing Authority really took such an extremely unfavourable view of the appellant. That the appellant's conduct was worthy of censure is beyond argument. That it would be deserving of punishment is highly probable, but the Act provides for the punishment of such conduct by a criminal court and not by a Licensing Authority. It is quite another matter to say that the appellant is not a fit person to hold an operator's licence. That is something which, in our view, could not be justified on the evidence about the appellant at present available."

Before the Tribunal, Mr M. S. R. Bruce, for the appellant, had argued that the original operator's licence grant remained valid even though the fee had not been paid; he argued that the only offence was the applicant's failure to fix identity discs to his vehicles as required by the Operators' Licences Regulations. But the Tribunal finds this argument inconsistent with the second application for a licence, in December 1970, since the same two vehicles were involved and the regulations make it quite clear that vehicles specified on a licence cannot be specified in an application for another licence.

By appealing against the refusal of the second application, says the Tribunal, the appellant was creating an example of the general principle that a litigant cannot blow both hot and cold; he cannot have it both ways. By making his application the applicant had affirmed that he wanted a new licence, which he could only do on the footing that when he made this application the vehicles involved were not specified on a current licence.

The Tribunal decided to hear the appeal, therefore, on the basis that the appellant in fact had no operator's licence when he applied for a new licence in December 1970. Mr Bruce had then argued that using the vehicles without an 0 licence was not an activity within the meaning of the 1968 Act to which the LA was entitled to have regard when considering under Section 64(2Xa) whether the applicant was a fit person to hold a licence. The activities covered by Section 62(4Xd) were those relating to business experience and not to personal conduct, he claimed. Using vehicles without an operator's licence rendered the user liable to conviction, but Mr Bruce had argued that if such conduct had not been the subject of a conviction which would bring it within Section 62(4)(e) it could not be considered as such an "activity". The Tribunal finds this argument unsound and considers that conduct in the course of carrying on a haulier's business is not irrelevant merely because it might have been the subject of a conviction to which regard could be had under Section 62(4Xe).

To use the vehicles without an operator's licence, says the Tribunal, was an unlawful act but breaking the law does not automatically render a person unfit to hold a licence. It is simply a matter to which regard has to be given in considering whether an applicant is a fit person or not, and while at one extreme it might amount to such a total disregard for the law as to indicate that the applicant was lacking in the integrity which must form an element in any assessment of fitness, at the other extreme it could be a comparatively venial matter.