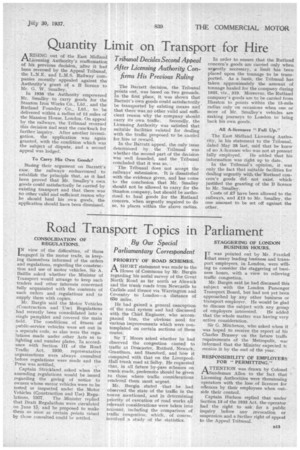 I N view of the difficulties, of those

engaged in the motor trade, in keeping themselves informed of the orders and regulations, regarding the construction and use of motor vehicles, Sir A. Baillie asked whether the Minister of Transport would arrange to keep such traders and other interests concerned fully acquainted with the contents of such orders and regulations and to supply them with copies.

Mr. Burgin said the Motor Vehicles (Construction and Use) Regulations had recently been consolidated into a single pamphlet and covered the main field. The conditions of fitness of public-service vehicles were set out in a separate code, as also were the regulations made under other Acts as to lighting and number plates. In accordance with Section III of the Road Traffic Act, 1930. representative organizations were always consulted .before regulations were made and the Press was notified.

Captain Strickland asked when the amending regulations would be issued regarding the giving of notice to owners whose motor vehicles were to be tested or inspected under the Motor Vehicles (Construction and Use) Regu lations, 1927. The Minister replied that Draft Regulations were circulated on June 15, and he proposed to make them so soon as certain points raised by those consulted could be settled.

ASHORT statement was made to the House of Commons by Mr. Burgin regarding his aerial survey of the Great North Road as far north as Alnwick and the trunk roads from Newcastle to Carlisle and thence via Warrington and Coventry to London—a distance of 650 miles.

He had gained a general conception of the road system and had discussed with the Chief Engineer, who accompanied him, the obvious need for various improvements which were contemplated on certain sections of these routes.

Sir T. Moore asked whether he had observed the congestion caused to traffic at Doncaster, Retford, Newark, Grantham, and Stamford, and how it compared with that on the LiverpoolHull trunk road at Selby. He requested that, in all future by-pass schemes on trunk roads, preference should be given to those where traffic considerations rendered them most urgent.

Mr. Burgin stated that he had observed the state of the traffic in the towns mentioned, and in determining priority of execution of road works all relevant considerations were taken into account, including the comparison of traffic congestion, which, of course, involved a study of the statistics. STAGGERING OF LONDON BUSINESS HOURS.

I T was pointed out by Mr. Frankel

that many leading business and transport employers, in London, were willing to consider the staggering of business hours, with a view to relieving traffic congestion.

Mr. Burgin said he had discussed this subject with the London Passenger Transport Board, but had not yet been approached by any other business or transport employer. He would be glad to discuss the subject with any group of employers interested. He added that the whole matter was having very active consideration.

Sir G. Mitcheson, who asked when it was hoped to receive the report of Sii Charles Brassey on the future traffic requirements of the Metropolis, wse informed that the Minister expected tr receive it by the end of the year.

RESPONSIBILITY OF EMPLOYERS FOR "PERMITTING."

A TTENTION was drawn by Colonel 1-1.Sandeman Allen to the fact that Licensing Authorities were threatening operators with the loss of licences for offences by their employees when outside their control.

Captain Hudson replied that under Section 13 of the 1933 Act, the operator had the right to ask for a public inquiry before any revocation or suspension and a further right of appeal to the Appeal Tribunal.