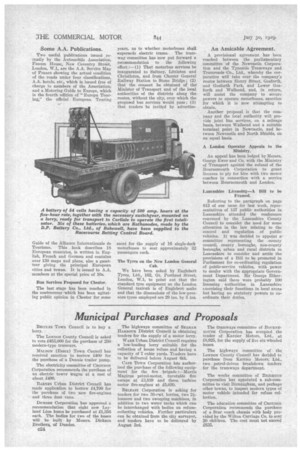 Page 46, 30th July 1929 — Municipal Purchases and Proposals
Close
Noticed an error?
If you've noticed an error in this article please click here to report it so we can fix it.
Keywords : Karrier, Rootes, Truck, Tram, Business / Finance

BECCLES Town Council is to buy a lorry.

The LowoosT County Council is asked to vote £453,000 for the purchase of 250 modern-type tramcars.

Thaiiox.; (Essex) Town Council has , received sanction to borrow £400 for the purchase of a Dennis trailer pump.

The electricity committee of CROYDON Corporation recommends the purchase of an electric tower wagon at a COSt of about 1490.

BARNES Urban District Council has made application to borrow £4,700 for the purchase of two new fire-engines and three dust vans.

DUNDEE Corporation has approved a recommendation that eight new Leyland Lion buses be purchased at £1,356 each. The bodies for two of the buses will be built by Messrs. Dickson Brothers, of Dundee. The highways committee of SEARAM HARBOUR District Council is obtaining tenders for the supply of a motor lorry.

WARE Urban District Council requires a low-loading lorry suitable for the collection of house refuse and having a capacity of 7 cubic yards. Tenders have to be delivered before August 6th.

CAPE TOWN Corporation has authorised the purchase of the following equipment for the fire brigade :—Morris Magirus petrol-motor, turntable fire escape at £3,839 and three turbine motor fire-engines at £5,030.

BELFAST Corporation is asking for tenders for two 30-cwt. lorries, two 2tanners and two sweeping machines, in addition to two water tanks which can be interchanged with bodies on refusecollecting vehicles. Further particulars can be obtained from the city surveyor, and tenders have to be delivered by August 3rd.

The tramways committee of BOrRNEMOUTH Corporation has accepted the tender of Karrier Motors, Ltd., at £8,925, for the supply of five six-wheeled buses.

The highways committee of the LONDON County Council has decided to purchase from Karrier Motors, Ltd., two ,petrol-driven breakdown tenders for the tramways department.

The works committee of BRIGHTON Corporation has appointed a sub-committee to visit Birmingham, and perhaps other towns, to inspect modern types of motor vehicle intended for refuse collection.

The education committee of CROYDON Corporation recommends the purchase of a Star coach chassis with body provided by the Wilton Carriage Co. to seat 20 children. The cost must not exCeed 1835.