1 What Users Tell Us 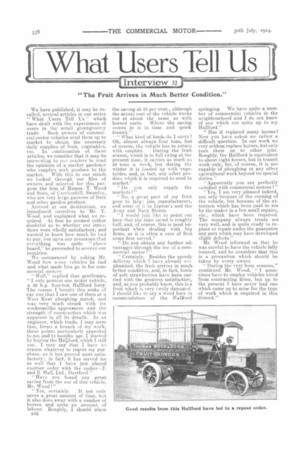 Page 6, 30th July 1914 — 1 What Users Tell Us
Close
Noticed an error?
If you've noticed an error in this article please click here to report it so we can fix it.
Keywords : Hanford, California, Kings County, California

"The Fruit Arrives in Much Better Condition."

We have published, it may be recalled, several articles in our series " What Users Tell Us " which have dealt with the experiences of users in the retail greengrocery trade. Such owners of commercial-motor vehicles send them up to market to obtain the necessary daily supplies of fruit, vegetables, etc. In continuation of these articles, we consider that it may be interestmg to our readers to read the opinions of a market gardener who supplies such produce to the market. With this in our minds we looked through our files of owners and selected for this purpose the firm of Messrs. T. Wood and Sons, of Croekenhill, Swanky, who are very large growers of fruit and other garden produce.

Arrived at our destination, we introduced ourselves to Mr. T. Wood, and explained what we required. At first he seemed rather doubtful as to whether our intentions were wholly satisfactory, and wanted to know how much he had to pay, but upon our assurance that everything was quite "above board," he proceeded to answer our inquiries.

We commenced by asking Mn Wood how realty vehicles he had and what made him go in for commercial ranters.

"Well," replied that gentlemao, " I only possess one motor vehicle, a 32 hp. four-ton Hanford lorry. The reason I bought this make of car was that I saw one of them at a West Kent ploughing match, and was very much struck with its workmanlike appeavance and the strength of construction which was apparent in all its details. As an engineer, which trade, I may mention, forms a branch of my work, these points particularly appealed to me, and 14 months ago I started by buying the Hanford, which I still 1lSe. I may say" that I have no reason whatever to regret my pur. chase, as it has proved most satisfactory; in fact, it has served me so well that I have just placed another order with the maker—J. and R Hall, Ltd., Dartford."

"Have you found any great saving from the use of this vehicle, Mr. Wood?"

"Yes, certainly. It not only saves a great amount of time, but it also does away with a number of horses, and quite an amount of 3abour. Roughly, I should place TAO

the saving at 25 per cent., although the actual cost of the vehicle works out at about the same as with horsed carts. Where the saving comes in is in time and quick transit."

"What kind of load do I carry ? Oh, almost always four tons, but of course, the vehicle has to return with empties. During the fruit season, which is in full swing at the present time, it carries as much as 50 tons a week, but during the winter it is loaded up with vegetables, and, in fact, any other produce which it is required to send to market."

"Do you only supply the markets ? "

" No, a great part of my fruit goes to larga jam manufacturers, and some of it to Lipton's and the Army and Navy Stores, " I would just like to point out here that the time saved is roughly half, and, of course, this is most important when dealing with big firms, as it is often a case of first come first served."

"Do you obtain any further advantages through the use of a commercial motor ? "

" Certainly. Besides the speedy delivery which I have already phasized, the fruit arrives in much better condition, and, in fact, loads of soft strawberries have been carried with the greatest satisfaction, and, as you probably know, this is a fruit which is very easily damaged. I should like to say a word here in commendation of the I-1 aDford springing. We have quite a number of commercial vehicles in the neighbourhood and I do not know of any which -ere quite up to my Hanford."

" Has it replaced many horses? Now you have asked me rather a difficult question. In our work we very seldom replace horses, but only turn them on to other jobs. Roughly, the Hanford is equivalent to about eight horses, but in transit work only, for, of course, it is not capable of ploughing or any other agricultural work beyond its special duties."

'Apparently you are perfectly satisfied with commercial motors ? "

"Yes, I am very pleased indeed, not only because of the running of the vehicle, but because of the attention which has been paid to me by the maker in a few small repairs, etc., which have been required. The company always treats me very well, and is quite ready to replace or repair under the guarantee any part which may have developed slight defects." • Mr. Wood informed us that. he was careful to have the vehicle folly insured, and he considers that this is a precaution which should be taken by every owner.

"During the very busy seasons," continued Mr. Wood, "I sometimes have to employ vehicles hired from contracting firms, hut up to the present I have never had one which came up to mine for the type of work which is required in this district!'