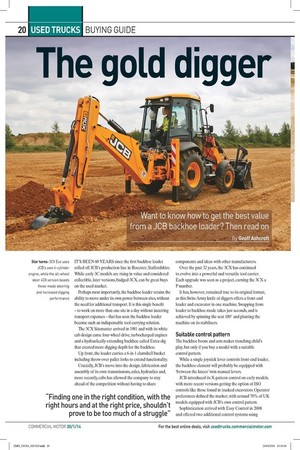 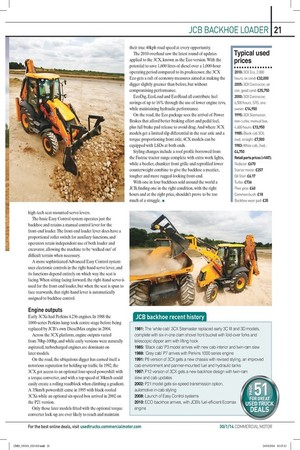 Page 15, 30th January 2014 — gold digger
Close
Noticed an error?
If you've noticed an error in this article please click here to report it so we can fix it.

Want to know how to get the best value from a JCB backhoe loader? Then read on By Geoff Ashcroft Star turns: 3CX Eco uses JCB's own 4-cylinder engine, white the att-wheet steer 40X version boasts three-mode steering and increased digging performance

IT'S BEEN 60 YEARS since the first backhoe loader rolled off JCB's production line in Rocester, Staffordshire. While early 3C models are rising in value and considered collectible, later versions, badged 3CX, can be great buys on the used market.

Perhaps most importantly, the backhoe loader retains the ability to move under its own power between sites, without the need for additional transport. It is this single benefit — to work on more than one site in a day without incurring transport expenses — that has seen the backhoe loader become such an indispensable tool-carrying solution.

The 3CX Sitemaster arrived in 1981 and with its white cab design came four-wheel drive, turbocharged engines and a hydraulically-extending backhoe called Extra-dig that created more digging depth for the backhoe.

Up front, the loader carries a 6-in-1 clamshell bucket including throw-over pallet forks to extend functionality. Crucially, JCB's move into the design, fabrication and assembly of its own transmissions, axles, hydraulics and, more recently, cabs has allowed the company to stay ahead of the competition without having to share

components and ideas with other manufacturers.

Over the past 32 years, the 3CX has continued to evolve into a powerful and versatile tool carrier. Each upgrade was seen as a project, earning the 3CX a P number.

It has, however, remained true to its original format, as this Swiss Army knife of diggers offers a front-end loader and excavator in one machine. Swapping from loader to backhoe mode takes just seconds, and is achieved by spinning the seat 180° and planting the machine on its stabilisers.

The backhoe boom and arm makes trenching child's play, but only if you buy a model with a suitable

While a single joystick lever controls front-end loader, the backhoe element will probably be equipped with 'between the knees' twin manual levers.

JCB introduced its X-pattern control on early models, with more recent versions getting the option of ISO controls like those found in tracked excavators. Operator preferences defined the market, with around 70% of UK models equipped with JCB's own control pattern. Sophistication arrived with Easy Control in 2008 and offered two additional control systems using

The basic Easy Control system operates just the backhoe and retains a manual control lever for the front-end loader. The front-end loader lever does have a proportional roller switch for auxiliary functions, and operators retain independent use of both loader and excavator, allowing the machine to be 'walked out' of difficult terrain when necessary.

Across the 3CX platform, engine outputs varied from 70hp-100hp, and while early versions were naturally aspirated, turbocharged engines are dominant on later models.

On the road, the ubiquitous digger has earned itself a notorious reputation for holding up traffic. In 1992, the 3CX got access to an optional four-speed powershift with a torque converter, and with a top speed of 30km/h could easily create a rolling roadblock when climbing a gradient. A 35km/h powershift came in 1995 with black-roofed 3CXs while an optional six-speed box arrived in 2002 on the P21 version. Only those later models fitted with the optional torque converter lock-up are ever likely to reach and maintain

their true 40kph road speed at every opportunity.

The 2010 overhaul saw the latest round of updates applied to the 3CX, known as the Eco version. With the potential to save 1,600 litres of diesel over a 1,000-hour operating period compared to its predecessor, the 3CX Eco gets a raft of economy measures aimed at making the digger slightly greener than before, but without compromising performance.

EcoDig, EcoLoad and EcoRoad all contribute fuel savings of up to 16% through the use of lower engine revs, while maintaining hydraulic performance.

On the road, the Eco package sees the arrival of Power Brakes that afford better braking effort and pedal feel, plus full brake pad release to avoid drag. And where 3CX models get a limited slip differential in the rear axle and a torque proportioning front axle, 4CX models can be equipped with LSDs at both ends.

Styling changes include a roof profile borrowed from the Fastrac tractor range complete with extra work lights, while a beefier, chunkier front grille and reprofiled lower counterweight combine to give the backhoe a meatier, tougher and more rugged-looking front-end. With one in four backhoes sold around the world a JCB, finding one in the right condition, with the right hours and at the right price, shouldn't prove to be too much of a struggle. •