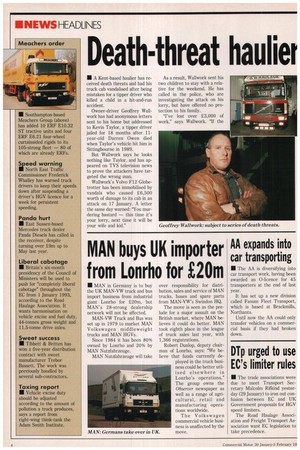 5peed warning North East Traffic Commissioner Frederick Whalley has warned truck drivers to keep their speeds down after suspending a driver's HGV licence for a week for persistent speeding.

Panda hurt • East Sussex-based Mercedes truck dealer Panda Diesels has called in the receiver, despite turning over £.9m up to May last year.

Liberal cabotage • Britain's six-month presidency of the Council of Ministers will be used to push for "completely liberal cabotage" throughout the EC from 1 January 1993, according to the Road Haulage Association. it wants harmonisation on vehicle excise and fuel duty, 44-tonnes gross weight and 11.5-tonne drive axles.

Taxing report • Vehicle excise duty should be adjusted according to the amount of pollution a truck produces, says a report from right-wing think-tank the Adam Smith Institute.