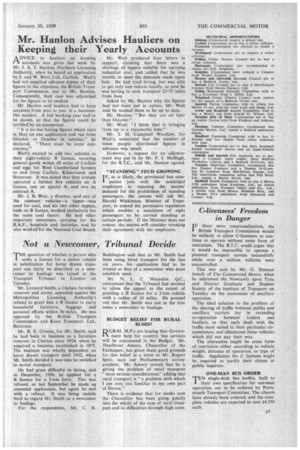 Page 37, 30th January 1959 — C-licensees' Freedom in Danger
Close
Noticed an error?
If you've noticed an error in this article please click here to report it so we can fix it.
Keywords : Transport, Traffic Law, Road Transport, Road Safety, Traffic

IF there were renationalization, the I British Transport Commission would be unlikely to allow C-licensees to continue to operate without some form of restriction. The B.T.C. could Argue that it would be impossible to operate a planned. transport system successfully while over a million vehicles were uncontrolled.

This was said by Mr. G. Duncan Jewell, of The Commercial Motor, when he addressed the Newcastle upon Tyne and District Graduate and Student Society of the Institute of Transport on Tuesday on the economics of ancillary operation.

The ideal solution to the problem of the sharing of traffic between public and ancillary carriers lay in extending co-operation between traders and hauliers, so that each dealt with the traffic most suited to their particular circumstances and eliminated those vehicles which did not pay their way.

The alternative might be some form of restriction either according to vehicle weight, distance of operation, or type of traffic. Applicants for C licences might be required to justify their claims at public inquiries.