TOUGHER rules to combat overloading and bad maintenance of goods 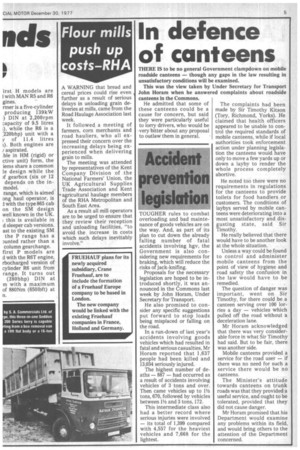 vehicles are on the way. And, as part of its plan to cut down the already falling number of fatal accidents involving hgv, the Government is also considering new requirements for braking, which will reduce the risks of jack-knifing.

Proposals for the necessary legislation are hoped to be introduced shortly, it was announced in the Commons last week by John Horam, Under Secretary for Transport.

He also promised to consider any specific suggestions put forward to stop loads being misplaced or falling on the road.

In a run-down of last year's accidents involving goods vehicles which had resulted in fatal and serious casualties, Mr Horam reported that 1,637 people had been killed and 13,034 seriously injured.

This intermediate class also had a better record where serious injuries were involved — its total of 1,399 compared with 4,557 for the heaviest vehicles and 7,668 for the lightest.