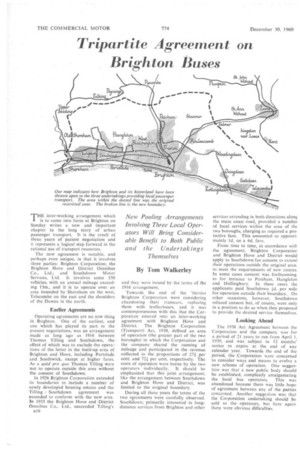 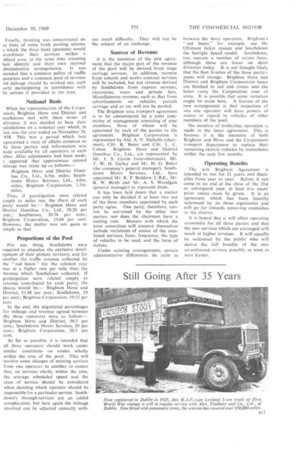 is to come into force at Brighton on Sunday writes a new and important chapter in the long story of urban passenger transport. it is the result of three years of patient negotiation and it represents a logical step forward in the rational use of transport resources.

The new agreement is notable, and perhaps even unique, in that it involves three parties: Brighton Corporation; the Brighton Hove and District Omnibus Co., Ltd.; and Southdown Motor Services, Ltd. It involves some 350 vehicles, with an annual mileage exceeding 13m., and it is to operate over an area bounded by Shoreham on the west, Telscombe on the east and the shoulders of the Downs in the north.

Operating agreements are no new thing in Brighton. One of the earliest, and one which has played its part in the present negotiations, was an arrangement made as long ago as 1916 between Thomas Tilling and Southdown, the • effect of which was to exclude the opera• tions of the latter in the built-up area of Brighton and Hove, including Portslade and ,Southwick, except at higher fares. As a quid pro quo Thomas Tilling were not to operate outside this area without the consent of Southdown.

In 1926 Brighton Corporation extended its boundaries to include a number of newly developed housing estates and the Tilling Southdown agreement was extended to conform with the new area. In 1935 the Brighton Hove and District Omnibus Co., Ltd., succeeded Tilling's 11 1 0

and they were bound by the terms of the 1916 arrangement.

Towards the end of the 'thirties Brighton Corporation were considering abandoning their tramcars, replacing them with trolleybuses, and it was contemporaneous with this that the Corporation entered into an inter-working agreement with Brighton Hove and District. The Brighton Corporation (Transport) Act, 1938, defined an area of operation (the greater part of the two boroughs) in which the Corporation and the company shared the running of mileage and participated in the revenue collected in the proportions • of 27i per cent. and 721 per cent. respectively. The costs of operation were borne by the two operators individually. It should be emphasized that this joint arrangement, like the arrangement between Southdown and Brighton Hove and District, was limited to the original boundary.

During all these years the terms of the two agreements were carefully observed. South-down, primarily interested in longdistance services from Brighton and other services extending in both directions aloni the main coast road, provided a numbei of local services within the area of tilt two boroughs, charging as required a pro• tective fare. This amounted to approxi• mately Id. on a 6d. fare.

From time to time, in accordance with the agreement, Brighton Corporatior and Brighton Hove and District would apply to Southdown for consent to extend their operations outside the original area to meet the requirements a new estates In some cases consent was forthcoming as for instance to Patcham, Hangleton and Hollingbury. In these cases the applicants paid Southdown per mile for operation outside their boundary. On other occasions, however, Southdown refused consent but, of course, were only in a position to do so when they proposed to provide the desired service themselves.

The 1938 Act Agreement between the Corporation and the company was for a period of 21 years to run from April 1. 1939, and was, subject to 12 months' notice to expire at the end of any calendar year. Towards the end of the period, the Corporation were concerned to consider ways and means to evolve a new scheme of operation. One suggestion was that a new public body should be established, completely amalgamating the local bus operators. This was abandoned because there was little hope of agreement between any of the parties concerned. Another suggestion was that the Corporation undertaking should be sold to the operators, but here again there were obvious difficulties.

Finally, thinking was concentrated on le lines of some fresh pooling scheme which the three local operators would o-ordinate their services within a efined area, at the same time retaining heir identity and their own internal dministrative arrangements. It was atended that a common policy of traffic ,peration and a common pool of revenue nd mileage should be worked out, each party participating in accordance with he service it provided in. the area.

National Basis When the representatives of the Corpoation, Brighton Hove and District and 1outhdown met with these terms of eference, it was decided to base their :alcutations on a notional year which, in 'act, was the year ended on November 30, 958. This was a period which best .epresented a state of affairs common to he three parties and information was nade available by all operators to each nher. After adjustments had been made, t appeared that approximate annual nileage was made up as follows:—

Proportions of the Pool

For one thing, Southdown were required to abandon the exclusive devel opment of their preSent territory, and for another the traffic revenue collected by the " red buses" for the selected year was at a higher rate per mile than the revenue which Southdown collected. If participation were related simply to revenue contributed by each party, the shares would be:— Brighton Hove and District, 51.48 per cent; Southdown, 29 per cent.; Brighton Corporation. 19.52 per cent.

In the end, the negotiated percentages for mileage and revenue agreed between the three operators were as follow:— Brighton Hove and District., 50.5 per cent,; Southdown Motor Services, 29 per cent.; Brighton Corporation, 20.5 per cent.

So far as possible, it is intended that all three operators should work under similar conditions on routes wholly within the area of the pool. This will involve some changes of existing services from one operator .to another to ensure that, on services wholly within the area, the average scheduled speed and the class of service should be considered when deciding which operator should be responsible for a particula-r service. Southdown's through-services are an added complication, but here again the mileage involved can be adjusted annually with

out much difficulty. They will not be the subject of an exchange.

It is the intention of the new agreement that the major part of the revenue of the pool will be derived from stage carriage services. In addition, revenue from schools and works contract services will be included, but not revenue derived by Southdown from express services, excursions, tours and private hire. Miscellaneous revenue, such as that from advertisements on vehicles, parcels carriage and so on, will not be pooled,

The Brighton area transport agreement is to be administered by a joint committee of management consisting of nine members, three of whom will be appointed by each of the parties to the agreement. Brighton Corporation is represented by Aid. A. V. Nicholls (chairman), Cl1r. R. Bates and Cllr, L. Cohen. Brighton Hove and District Omnibus Co., Ltd., are represented by Mr. J. S. Gavin (vice-chairman), Mr. T. W. H. Gailey and Mr. H. G. Baker (the company's general manager), Southdown Motor Services, Ltd., have appointed Mr. R. P. Beddow, C.13.E., Mr. R. W. Birch and Mr, A. S. Woodgate (general manager) to represent them.

It has been laid down that a matter can only be decided if at least two out of the three members appointed by each party agree. One party, therefore, cannot be out-voted by the other two parties, nor does the chairman have a casting vote. Matters with which the joint committee will concern themselves include variations of routes of the combined services, fares, frequency, the type of vehicles to be used, and the form of tickets.

Under existing arrangements, certain administrative differences do exist as

between the three operators. Brighton's " red buses,for example, use the Ultimate ticket system and Southdown the Setright Speed model. Southdown, too, operate a number of return fares, although these are fewer on short distances today. It is not thought likely that the fleet liveries of the three participants will change. Brighton Hove and District and Brighton Corporation buses are finished in red and cream and the latter carry the Corporation coat of arms. It is possible that some variation might be made here. A feature of the new arrangement is that inspectors of any one operator will have powers of access in regard to vehicles of other members of the pool.

No mention of trolleybus operation is made in the latest agreement. This is because it is the intention of both Brighton and Hove and the Corporation transport department to replace their remaining electric vehicles by motorbuses within the next few months.

Operating Benefits The new Brighton Agreement is intended to run for 21 years, and thereafter from year to year. Before it can come to an end at the close of the 21st or subsequent year, at least five years' prior notice must be given. It is an agreement which has been heartily welcomed by its three signatories and will go far towards removing anomalies in the district.

It is hoped that it will effect operating economies for all three parties and that the new services which are envisaged will result in higher revenue. It will equally be welcomed by the public who will derive the full benefits of the new co-ordinated services possibly as soon as next Easter.