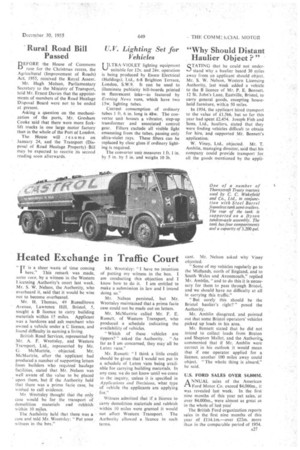 BEFORE the House of Commons rose for the Christmas recess, the Agricultural (Improvement of Roads) Act, 1955, received the Royal Assent.

Mr. Hugh Molson, Parliamentary Secretary to the Ministry of Transport, told Mr. Ernest Davies that the appointments of members of the Road Haulage Disposal Board were not to be ended at present.

Asking a question on the mechanization of the ports, Mr. Gresham Cooke said that there were more forklift trucks in one large motor factory than in the whole of the Port of London.

The House will resume on January 24, and the Transport (Disposal of Road Haulage Property) ilI may be expected to receive its second