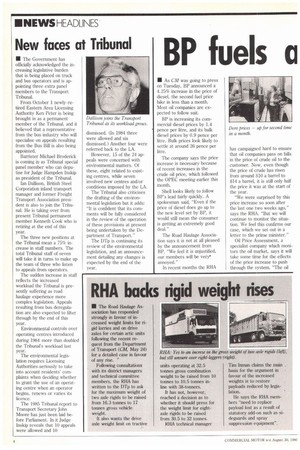 Page 6, 30th August 1986 — New faces at Tribunal
Close
Noticed an error?
If you've noticed an error in this article please click here to report it so we can fix it.
Keywords : Australian Courts, Tribunal, Law / Crime

• The Government has officially acknowledged the increasing legislative burden that is being placed on truck and bus operators and is appointing three extra panel members to the Transport Tribunal.

From October 1 newly-retired Eastern Area Licensing Authority Ken Peter is being brought in as a permanent member of the Tribunal, and it believed that a representative from the bus industry who will specialise on appeals resulting from the Bus Bill is also being appointed.

Barrister Michael Broderick is coming in as Tribunal special panel member who can deputise for Judge Hampden Inskip as president of the Tribunal.

Ian Dabison, British Steel Corporation inland transport manager and former Freight Transport Association president is also to join the Tribunal. He is taking over from present Tribunal permanent member Kenneth Cook who is retiring at the end of this year.

The three new positions at the Tribunal mean a 75% increase in staff numbers. The total Tribunal staff of seven will take it in turns to make up the team of three who listen to appeals from operators.

The sudden increase in staff reflects the increased workload the Tribunal is presently suffering as road haulage experience more complex legislation. Appeals resulting from bus deregulation are also expected to filter through by the end of this year.

The environmental legislation requires Licensing Authorities seriously to take into account residents' complaints when deciding whether to grant the use of an operating centre when an operator begins, renews or varies its licence.

The 1985 Tribunal report to Transport Secretary John Moore has just been laid before Parliament. In it Judge lnskip reveals that 10 appeals were allowed and 10 dismissed. (In 1984 three were allowed and six dismissed.) Another four were referred back to the LA.

However, 15 of the 24 appeals were concerned with environmental matters. Of these, eight related to existing centres, while seven involved new centres and/or conditions imposed by the LA.

The Tribunal also criticises the drafting of the environmental legislation but it adds: "It is confident that its comments will be fully considered in the review of the operation of these provisions at present being undertaken by the Department of Transport."

The DTp is continuing its review of the environmental legislation, and an announcement detailing any changes is expected by the end of the year.