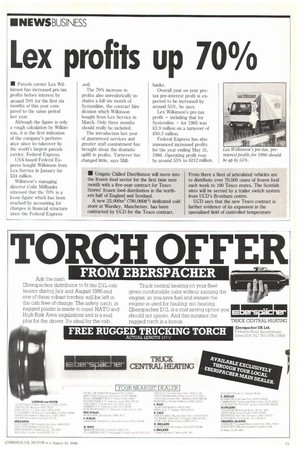 Page 15, 30th August 1986 — Lex profits up 70%
Close
Noticed an error?
If you've noticed an error in this article please click here to report it so we can fix it.
Keywords : Wilkinson, Tax, Profit, Business / Finance

• Parcels carrier Lex Wilkinson has increased pre-tax profits before interest by around 70% for the first six months of this year compared to the same period last year.

Although the figure is only a rough calculation by Wilkinson, it is the first indication of the company's performance since its takeover by the world's largest parcels carrier, Federal Express.

USA-based Federal Express bought Wilkinson from Lex Service in January for 24 Wilkinson's managing director Cohn Millbanks stressed that the 70% is a loose figure which has been reached by accounting for changes in financial structure since the Federal Express The 70% increase in profits also unrealistically includes a full six month of Systemline, the contract hire division which Wilkinson bought from Lex Service in March. Only three months should really be included.

The introduction last year of guaranteed services and greater staff commitment has brought about the dramatic uplift in profits. Turnover has changed little, says Mill banks.

Overall year on year pretax pre-interest profit is expected to be increased by around 55%, he says.

Federal Express has also announced increased profits for the year ending May 31, 1986. Operating profit rose by around 55% to $212 million.