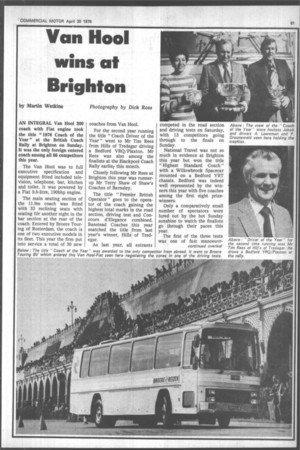 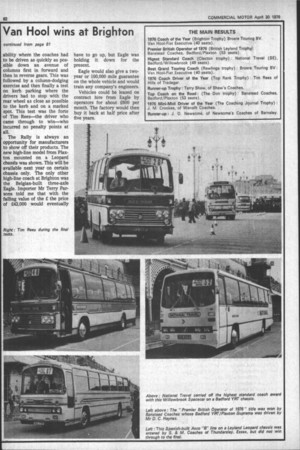 by Martin Watkins Photography by Dick Ross AN INTEGRAL Van Hool 300 coach with Fiat engine took the title "1976 Coach of the Year" at the British Coach Rally at Brighton on Sunday. It was the only foreign entered coach among all 86 competitors this year.

The Van Hool was to full executive specification and equipment fitted included television, telephone, bar, kitchen and toilet. It was powered by a Fiat 9.8-litre, 190bhp engine.

The main seating section of the 11.9m coach was fitted with 33 reclining seats with seating for another eight in the bar section at the rear of the coach. Entered by Broere Touring of Rotterdam, the coach is one of two executive models in its fleet. This year the firm put into service a total of 30 new coaches from Van Hool.

For the second year running the title " Coach Driver of the Year" went to Mr Tim Rees from Hills of Tredegar driving a Bedford VRQ/Plaxton. Mr Rees was also among the finalists at the Blackpool Coach Rally earlier this month.

The title "Premier British Operator" goes to the operator of the coach gaining the highest total marks in the road section, driving test and Concours d'Elegance combined, Banstead Coaches this year snatched the title from last year's winner, Hills of Tredegar.

As last year, all entrants competed in the road section and driving tests on Saturday, with 13 competitors going through to the finals on Sunday.

National Travel was not so much in evidence at Brighton this year but won the title " Highest Standard Coach" with a Willowbrook Spacecar mounted on a Bedford YRT chassis. Bedford was indeed well represented by the winners this year with five coaches among the first eight prizewinners.

Only a comparatively small number of spectators were lured out by the hot Sunday sunshine to watch the finalists go through their paces this year.

The first of the three tests was one of fast manoeuvr ability where the coaches had • to be driven as quickly as possible down an avenue of columns first in forward and then in reverse gears. This was followed by a column-dodging exercise and then finally a test on kerb parking where the drivers had to stop with the rear wheel as close as possible to the kerb and on a marked spot. This test was the forte of Tim Rees—the driver who came through to win—who incurred no penalty points at all.

, The Rally is always an opportunity for manufacturers to show off their products. The new high-line model from Plaxton mounted on a Leopard chassis was shown. This will be available next year on certain chassis only. The only other high-line coach at Brighton was the Belgian-built three-axle Eagle. Importer Mr Terry Parsons told me that with the falling value of the £ the price of £42,000 would eventually have to go up, but Eagle was holding it down for the present.

Eagle would also give a twoyear or 100,000 mile guarantee on the whole vehicle and would train any company's engineers.

Vehicles could be leased on contract hire from Eagle by operators for about £600 per month. The factory would then buy it back at half price after five years.