Bulk Collection of Milk a Success 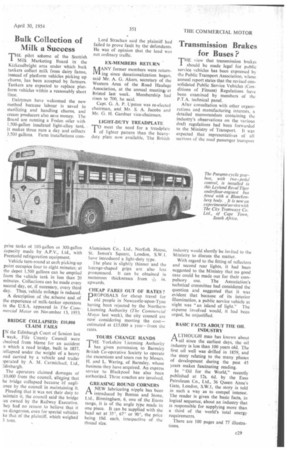 Page 79, 30th April 1954 — Bulk Collection of Milk a Success
Close
Noticed an error?
If you've noticed an error in this article please click here to report it so we can fix it.
Keywords : Milk, Prestcold

T"pilot soheme of the Scottish Milk Marketing Board in the Kirkcudbright area under which bulk tankers collect milk from dairy farms, instead of platform vehicles picking up churns, has been accepted by farmers. Tankers are expected to replace platform vehicles within a reasonably short time.

Dairymen have welcomed the new method because labour is saved in sterilizing and handling churns, and cream producers also save money. The Board are running a Foden oiler with 1,500-gallon insulated light-alloy tank. It makes three runs a day and collects 3,500 gallons. Farm installations corn prise tanks ot 180-gallon or 300-gallon capacity made by A.P.V., Ltd., with Prestcold refrigeration equipment.

Vehicle turn-round at each picking-up point occupies four to eight minutes; at the depot 1,500 gallons can be emptied from the vehicle tank in less than 20 minutes. Collections can be made every second day, or, if necessary, every third day. Thus, vehicle milage is reduced, A description of the scheme and of the experience of milk-tanker operators in the U.S.A. appeared in The Commercial Motor on Nov ember 13. 1953.

BRIDGE COLLAPSED: /10,000 CLAIM FAILS IN the Edinburgh Court of session last week, Fife County Council were lbsolved from blame for an accident n which a road bridge, built in 1857, rollapsed under the weight of a heavy oad carried by a vehicle and trailer rperated by A. M. Carmichael. Ltd., Edinburgh.

The operators claimed damages of 10.000 from the council, alleging that he bridge collapsed because of neglience by the council in maintaining it. Pleading that it was not their duty to taintain it, the council said the bridge as owned by the Railway Executive. bey had no reason to believe that it as dangerous, even for special vehicles ke that of the plaintiff, which weighed 3 tons. Lord Strachan said the plaintiff had failed to prove fault by the defendants. He was of opinion that the load was not ordinary traffic.

ik A N Y former members were returnIVI ing since denationalization began, said Mr. A. G. Akers, secretary of the Western Area of the Road Haulage Association, at the annual meeting, at Bristol last week. Membership had risen to 700, he said.

he plate is slightly thinner and the lozenge-shaped grips are also less pronounced. It can be obtained in numerous thicknesses from in. upwards.

CHEAP FARES OUT OF RATES?

PROPOSALS for cheap travel for old people in Newcastle-upon-Tyne having been rejected by the Northern Licensing Authority (The Commercial Motor last week), the city council are now considering meeting the cost— estimated at E15,000 a year—from the rates.

TH E Yorkshire " Licensing Authority 1 has given permission to Barnsley British Co-operative Society to operate the excursions and tours run by Messrs. H. and L. Waring, of Barnsley, whose business they have acquired. An express service to Blackpool has also been authorized. Three coaches arc involved.

ANEW lubricating nipple has been introduced by Benton and Stone, Ltd.. Birmingham, 6, one of the Enots range, it is of the angle type made in one piece. It can be supplied with the head set at 35", 67' or 90', the price being 10d. each, irrespective of the thread size.