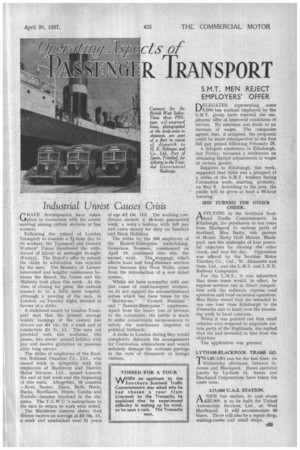 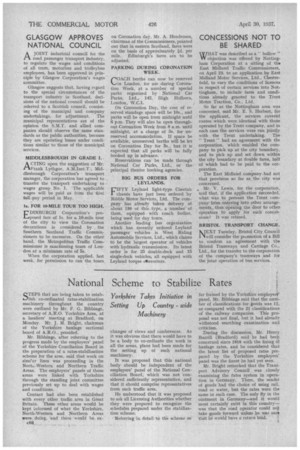 GRAVE developments have taken place in connection with the unrest existing among certain sections' of bus workers.

Following the refusal of London Transport to concede a 7i-hour day to its workers, the Transport and General Workers' Union threatened the withdrawal of labour at midnight to-night (Friday). The Board's offer to submit the claim to arbitration was rejected by the men: The Ministry of Labour intervened and lengthy conferences between the Board, the Union and the Ministry took place this week. At the time of closing for press, the outlook seemed to be a little more hopeful, although a meeting of the men, in London, on Tuesday night, decided in favour of a strike,

A statement issued by London Transpcirt says that the present average weekly earnings . of the central bus drivers are £4 14s. 2d. a week and of conductors £4 7s. Id. The men are provided with free uniforms, fite passes, two weeks' annual holiday with pay and receive gratuities or pensions after long service.

The strike of employees of the Eastern National Omnibus Co., Ltd., who ceased work in sympathy with the employees of Maidstone and District Motor Services, Ltd., spread towards the end of last week and the beginning of this week. Altogether, 10 counties —Kent, Sussex, Essex, Beds, Herts, Bucks, Northants, Hunts, Cambs and Norfolk—became involved in the disputes. The T.G.W.U.'s instructions to the men to return to work were defied.

The Maidstone concern states that drivers receive an average of ,43 10s. Id. a. week and conductors over 21 years

of age £2 14s. lid, The working conditions include a• 48-hour guaranteed week, a week's holiday with full pay and extra money for duty on Sundays and Bank Holidays.

The strike by the 100 employees of the Bassett-Enterprise undertaking, Gorseinon, Swansea, commenced on April 19, continued into this, the

second, week. Theostoppage, which affects local and long-distance services from Swansea into West Wales, arises from the introduction of a new ticket System.

Whilst we have sympathy with any just cause of road-transport workers, we do not support the unconstitutional action which has been taken by the " Maidstone," " Easterh National" and "Bassett-Enterprise " employees. Apart from the heavy loss of revenue to the companies, the public is made to suffer considerable inconvenience to satisfy the reactionary impulses of political hotheads.

A strike in London during May would completely dislocate the arrangements for Coronation celebrations and would seriously damage the national prestige in the eyes of thousands of foreign visitors.

DELEGATES representing some 8,000 bus workers employed by the S.M.T. group have rejected the employers' offer of improved conditions of service. No reference was made to an increase of wages. The companies agreed that, if accepted, the proposals could be made retrospective to the first full pay period following February 28.

A delegate conference in Edinburgh, last Friday, favoured a settlement on obtaining further adjustments in wages of certain grades.

Inquiries in Edinburgh, this week, suggested that there was a prospect of a strike of the S.M.T. workers during Coronation week, starting, 'probably, on May 9. According to the men, the public will be given at least a 48-hour warning.

SHE TURNED THE OTHER CHEEK.

A PPLYING to the Southern Scot.1-11and Traffic Commissioners, in Edinburgh, for permission to run tours from Blackpool to various parts. of Scotland, Miss Batty, sole partner of Messrs. Batty Holt Motors, Blackpool, met the onslaught of four powerful objectors by turning the other cheek, and won the day. Opposition was offered by the Scottish Motor Traction Co., Ltd., W. Alexander and Sons, Ltd., and the L.M.S. and L.N.E. Railway Companies.

For the L.M.S., it was submitted that these tours would, in effect, be express services run in direct competition with the railways, express road operators and local excursion operators. Miss Batty stated that she intended to run one tour from Edinburgh to the Trossachs and to hand over the remaining work to local concerns.

When it was pointed out that small vehicles were required -to negotiate certain parts of the Highlands, she replied that she bad intended to hire from the objectors.

AMCARS ran for the last time; on 1 Wednesday afternoon, between St. Alines and Blackpool. Buses operated jointly by Lytham St. Annes and Blackpool Corporations have taken the route over.

ANEW bus station, to cost about 25,000, is to be built for United Automobile Seniices, Ltd., at West Hartlepool. It will accommodate 30 buses. There will also be a repair shop, waiting-rooms and retail shops.

A JOINT industrial council for the road passenger transport industry, to regulate the wages and conditions of all tram, motorbus and trolleybus employees, has been approved in principle by Glasgow Corporation's wages committee.

Glasgow suggests that, having regard to the special circumstances of the transport industry in Scotland, decisions of the national council should be referred to a Scottish council, consisting of the municipal and company undertakings, for adjustment. The municipal representatives are of the opinion the S.M.T. and allied companies should observe the same standards as the public authorities, because they are operating buses under condia tions similar to those of the municipal services.

MIDDLESBROUGH IN GRADE I..

ACTING upon the suggestion of Mr: Frank Lythgoe, A.M.Inst.T., Middlesbrough Corporation's transport manager, the corporation has agreed to transfer the transport undertaking to wages group No. 1. The applicable wages will be paid as from the first full pay period in May.

EDINBURGH Corporation's proLaposed fare of is. for a 10-mile tour of the city to view the Coronation decorations is considered by the Southern Scotland Traffic Commissioners to be excessive. On the other hand, the Metropolitan Traffic Commissioner is sanctioning tours of London at a minimum rate of '5s.

When the corporation applied, last week, for permission to run the tours on Coronation day. Mr. A. Henderson, chairman of the Commissioners, pointed out that in eastern Scotland, fares were on the basis of approximately d. per mile. Edinburgh's fares are to be adjusted.

COACH berths can now be reserved in London, for use during Coronation Week, at a. number of special parks organized by National Car Parks, Ltd., 142, High Holborn, London, W.C.1.

On Coronation Day, the cost of reserved standage space will be 10s., and parks will be open from midnight until 6 p.m. They will also be open throughout Coronation Week from 8 a.m. until midnight, at a charge of 5s. for unreserved accommodation. If space be available, unreserved berths will be let on Coronation Day for 5s., but it is expected that all parks will be fully booked up in advance.

Reservations can be made through National Car Parks, Ltd., or the principal theatre booking agencies.

CIFTY Leyland light-type Cheetah .I.chassis have just been ordered by Ribble Motor Services, Ltd. The company has already taken delivery of about 130 of this type, a number of them, equipped • with coach bodies, being used for day tours.

• Another leading bus organization which has recently ordered Leyland passenger vehicles is West Riding Automobile Services, Ltd., which claims to be the largest operator of vehicles with hydraulic transmission. Its latest order is for 25 double-deck and 15 single-deck vehicles, all equipped with Leyland torque cienverters.

CONCESSIONS NOT TO BE SHARED

WHAT was described as a " hollow " objection was offered by Nottingham Corporation at a sitting of the East Midland Traffic Commissioners, on April 23, to an application by East Midland Motor Services, Ltd., Chesterfield, to vary the conditions of licences in respect of certain services into Nottingham, to include fares and conditions already granted to the Trent Motor Traction, Co., Ltd, So far as the Nottingham area was concerned, said Mr. E. S. Herbert, for the applicant, the services covered routes which were identical with those operated by the Trent company, and in each case the -services were run jointly with the Trent undertaking. The " Trent " had an agreement with the corporation. which enabled the company to pick up at the city boundary, and to pick up and set down within the city boundary at double fares, half of which had to be paid to the corporation.

The East Midland company. had not that provision so far as the city was concerned.

• Mr. V. Lewis, for the corporation, said that, if the application succeeded, what was to prevent the Trent coin.pany-from entering into other arrangements,. thus opening the door to other operators to apply for such concessions? It was refused,

will consider the piomotion of a Bill to confirm an agreement with the Bristol Tramways and Carriage Co., Ltd., for the transfer to the corporation of the company's tramways and for the joint operation of bus services.